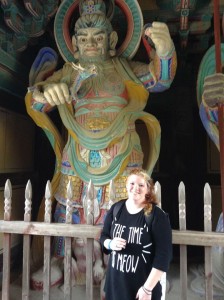 Most business students read about international business strategies, but few receive the chance to see international policies in action. Rebecca Henderson, a senior accounting major, spent a semester abroad in Daegu, South Korea. She enrolled in business courses, developed Korean language skills, and became immersed in the local culture. Henderson’s decision to spend a semester abroad may give her the upper hand as she begins to take part in the global economy.

While abroad, Henderson studied at Keimyung University, which has a population of around twenty seven thousand students and makes up a large portion of Daegu, the third largest city in South Korea. Henderson, supported by the Benjamin A. Gilman International Scholarship as well as the University Honors Program, took five classes while abroad: Korean Language, Korean Culture, Korean History, International Business, and Managerial Accounting. “When I wasn’t studying, I was trying to find new places to eat and trying unfamiliar foods,” Henderson said.

An aspect of the Benjamin A. Gilman International Scholarship requires Henderson to share her experiences abroad. Her goal is inspire others to follow in her footsteps. She will speak to several classes in the College of Business Administration, discussing the importance of South Korea in the global economy and how that importance has been increasing in recent years. “[South] Korea’s economy has been one of the fastest growing economies in the industrialized world, despite the major recession,” she said.

Henderson said the trip changed her in a positive way. “The way you can just be immersed in a culture, learning the language and meeting the people, it just…you just can’t describe what it does to you as a person,” she said. She also noted that, given the opportunity, she would return to South Korea without a second thought. 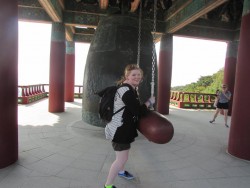 While abroad, she became heavily involved in the Korean Pop (KPOP) music scene, which has been growing in the American music industry ever since the launch of artist PSY and his song “Gangnam Style.” “I saw KPOP live for the first time abroad, and now I’m addicted to it,” Henderson said.

Upon graduation, Henderson intends to attend graduate school and get her Master’s Degree in Forensic Accounting. “The University Honors Program not only supported my trip to [South] Korea, but it’s also given me a critical eye for my work, making sure that what I accomplish is of the highest grade. The way that Dr. Engel and Dr. Desiderio both worked with me to make sure that I was and still am completing my goals is something that I’m going to hang on to even after I have my Master’s Degree and as I make a name for myself in my field,” Henderson said.