Behind the curtain, many of Georgia Southern University’s own students contribute to the magic seen on stage in Theatre South productions. Honors student Olivia Carter’s (theatre ‘15) backstage work has transformed the Blackbox Theater from a bare room to other, fantastic worlds through her prop and set design. Carter’s hard work has not gone unnoticed; her prop designs for Hamlet and Race earned second place in the Allied Design competition at the annual American College Theatre Festival (ACTF). 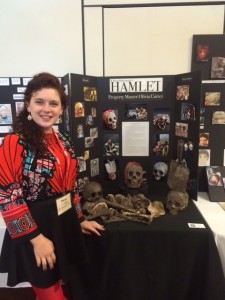 A significant amount of research went into Carter’s designs for Hamlet, which required Carter to create anatomically-correct skulls and bones for the famous graveyard scene in the show’s fifth act.

“One of my judges was actually one of the few forensic designers in the theatre industry,” Carter said, “so she appreciated the work I put into my skulls, and she was able to offer valuable feedback.”

Her work on Race also required meticulous detailing, known as hyper-realistic prop design. Carter created the law firm’s logo, business cards, letterheads, and diplomas for its employees because the play took place solely in a law firm’s office. She recreated famous newspapers such as the New York Times, USA Today, and the Chicago Tribune, and inserted headlines that corresponded with the Race’s plot and characters. This process involved scrupulous detail work. From matching the color of newsprint exactly to mimicking each newspaper’s layout exactly, Carter made sure each prop mirrored the real thing. She recalled cast and crew members picking up her newspapers to read them, only to realize they were prop newspapers.

Overall, Carter found her experience at ACTF to be immensely valuable. “It was phenomenal hearing people in the industry talk about my work,” Carter said. “I was able to get a lot of critical feedback that I really learned from.” Carter was also grateful for the chance to network with professionals in her field, as well as other students like herself.

In opposition to her realistic prop design, Carter recently created a mystical world for one of Georgia Southern’s spring mainstage productions, Metamorphoses, a postmodern rendering of Ovid’s collection of Greek myths. Carter designed the show’s elaborate set as part of her Honors Capstone project. Both digital projections and a geometric chandelier dangling from the ceiling dazzled the audience. Carter’s designs also featured a center-stage pool, the central piece of the performance. Representing such locations as the River Styx and the pool of King Midas, the feature contained most of the play’s action and provided a unique centerpiece for the show.

Carter plans to continue theatre in the future. Her experience at ACTF prepared her for the future: “Just to be nominated was a huge compliment and confidence booster,” Carter said of her experience. “Now I know that I can really do this as a career.” After graduation, Carter hopes to break into the theatre industry and pursue her passion for design work.