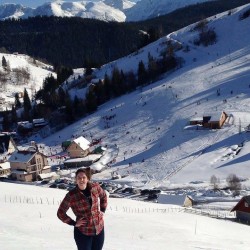 After completing her English degree at Georgia Southern a little over a year ago, Honors alumna Kelsey Keane packed her bags for Kosovo, a small country located in Southeastern Europe. Keane settled into Mitrovicë, Kosovo in September 2014, where she worked as a Fulbright English Teaching Assistant for nine months.

“I was a cultural ambassador to high school and university students in Kosovo,” said Keane. “While abroad, my greatest responsibility was to implement Western classroom models with the city’s public high school: encouraging engaged learning through student participation, extracurricular activities, and innovative curriculum development.”

Her positive impact on Mitrovicë was not limited to the classroom: Keane also served as a guest lecturer at local nonprofits and universities concerning American culture and its higher education system. She also participated in teacher training programs, summer camp development, and community service projects throughout the city.

Keane’s recent return to her hometown of Savannah has provided her with the opportunity to fight economic inequality at home. She currently works as a loaned associate for the United Way of the Coastal Empire annual giving campaign, a local organization whose mission is to combat poverty in certain counties of Southeast Georgia.

While Keane is not currently planning to work abroad in the near future, she is preparing for her next big adventure: law school.

“Nine months living in Kosovo provided the context to establish my ideas on communal transitions from negative to positive peace,” said Keane. “My observations also led me to commit fully to the study of law as my research interests expanded to exploring legal codes’ impact on post-conflict societal progress.