Out of the Classroom and into the Real Thing

What began as a regular luncheon turned into a career-defining moment for Zack Davidson, a senior computer science major. Last year, Davidson attended a lunch event hosted by the College of Engineering and Information Technology (CEIT), where he met and exchanged contact information with Jim Scholefield, former CTO of Coca-Cola and current CIO of Nike, Inc. This meeting ultimately led to a Coca-Cola summer internship for Davidson, a coveted position not usually awarded to college students. Davidson spent three months at Coca-Cola’s Technology Plaza in Atlanta as a data analytics platform developer/ administrator, where he worked primarily with a program called Splunk. His job was to develop and deploy an enhanced monitoring and reporting solution for the IT operations activity of job scheduling, such as running the payroll system. 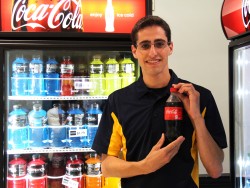 Davidson’s task not only required him to build search scripts and dashboards for monitoring and reporting to update an outdated system, but he also had to learn how to use Splunk, a program with which he had little experience.

“I was at Coca-Cola for three months,” said Davidson, “and in that time, I went from knowing nothing about Splunk to teaching other interns and KO employees how to use it. People were actually coming to my meetings just to hear me talk about it.”

After learning how to navigate Splunk, Davidson was able to create and deploy an enterprise-production ready application in only four weeks. Not only that, but he also gained valuable insight into working in the IT field.

“Computer science and IT are actually becoming integrated into a field called development and operations, or devops, so this internship helped me gain necessary experience in IT,” said Davidson.

Following graduation, Davidson plans to possibly continue his career at Coca-Cola or branch out to other corporations that use Splunk such as Nike Inc. Regardless of where he goes, Davidson is optimistic about the opportunities that his internship has opened up for him.

“I completed this internship because I wanted to learn as much as possible,” said Davidson. “I don’t want to just be a guy with a degree. I like to go to new environments and blow people away.”