Taking Research on the Road: Riley Theis at NACS

On August 16, while many other college students were heading back to campus for the upcoming semester, senior chemistry major Riley Theis was hundreds of miles away, presenting research in Boston for the National American Chemistry Society (NACS). The oral presentation she delivered was titled “Spectroscopic, Structural, and Energetic Analysis of Noble Gas Cations.” This project fell under a subfield of chemistry called astrochemistry, a branch of science dedicated to better understanding the universe and its chemical components. Theis’ research focused specifically on noble gases and their ability to create molecular bonds. A recent break-through in the field discovered a noble gas molecule, argon hydride, in an exploded star, a watershed moment in astrochemistry—noble gases typically are incapable of bonding to form molecules. This discovery inspired Theis’ project, in which she tested other noble gases for the ability to bond in space, focusing on argon and neon.

“My mentor, Dr. Fortenberry, was very interested in the recent discovery of argon hydride, and I became interested in it as well,” Theis explained. “We wanted to know if other bonds like this were possible.” 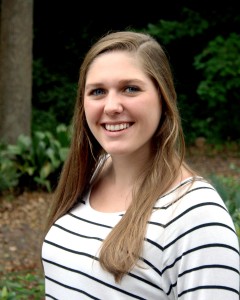 Because these chemical bonds can only occur in space, Theis’ research is grounded in theory. She tested four different reactions to see if they could produce molecules similar to the one found in space. Her research gives optimism to the search for other noble gas molecules.

Theis said, “Our breakthrough occurred with ArOH+. This molecule had the highest bond strength of all the ones we tested, meaning it has a high potential of being found in space.”

In addition to delivering a successful presentation, Theis found NACS, which drew professors, scientists, and students from all over the world, an excellent opportunity for meeting professionals in her field and individuals who shared her passion for astrochemistry.

“These conferences are a great place for networking and just getting to talk about things you enjoy,” Theis said. “It was great to be able to see all the research that’s out there.”