Georgia Southern’s Mock Mediation Club is one of the largest and most successful mediation teams in the United States. Thanks to the efforts of its thirty-five members, it has brought home endless accolades from both regional and national tournaments. Only two years ago, however, it was not even recognized as a student organization.

In 2013, honors student Dylan John (construction management ’16) convinced two friends to compete in the regional mock mediation tournament, not expecting to win seven awards and move on to nationals. But without university funding or support, attending nationals seemed like a faraway dream.

“During a presentation at World Congress, we had to admit that we weren’t going to be able to go to nationals, due to funding,” said John, “but then one of the judges offered us a generous donation and said, ‘if I give you this, will you go?’”

This pivotal moment in Mock Mediation Club’s growth allowed the club to win 8th in 2014 nationals during its first year of existence, as well as to receive support from the university. Since then, the club has expanded from John and his two friends to include thirty-five people, including honors students Jessica Shanken (international studies ’16), Giselle Devot (communication studies ’16), and Brandi Hawkins (pre-nursing ’18). Each of these students fill a leadership role in the club and have contributed to its success in many areas, from competition to service learning. 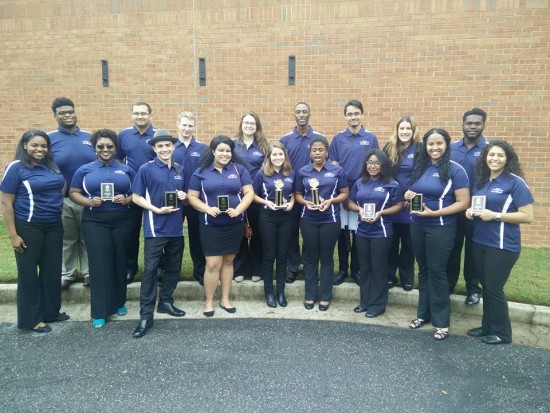 “Mock mediation isn’t just about competing,” said Shanken, president of Mock Mediation Club. “We’re trying to work with other student organizations to do something for the student body. We’ve also been working with service learning by teaching at-risk youth mediation skills.”

Devot, the Vice President of Public Relations and Community Engagement, elaborated on the club’s community involvement: “Next semester we’re planning to become more involved with campus by collaborating with other organizations and finding opportunities to spread conflict resolution skills to fellow students”

In addition to their community involvement, the Mock Mediation Club has found immense success at various tournaments. At this year’s Regional Mediation Tournament, hosted by Brenau University from October 8-9, the club received several awards, including four of the top twenty advocates, two of the top ten individual mediators, one of the top six teams in the advocate/ client team category, and one of the top six teams in the mediation team category. These awards have qualified the team for the undergraduate international competition in Des Moines, Iowa, which will take place in early November.

Shanken said, “Getting ready for competition this year is hectic, yet so rewarding. It’s so cool to see everyone so excited, lights in their eyes, as we prepare for competition in Iowa.”

But even for a team that consistently excels, winning isn’t everything. One of the club’s primary foci is helping its members develop leadership and communication skills.

Hawkins, the club’s secretary, spoke about how joining Mock Mediation Club helped her step outside of her comfort zone: “When I first started college, I was really shy, but I wanted to keep up the level of involvement I had in high school. After observing a competition, I thought, ‘if they can do this, I can, too,’ and from there, I jumped into it. Now I’m not afraid to speak at rotunda tables or at meetings. Mediation has expanded my leadership abilities—I’ve come such a long way.”

Perhaps the Mock Mediation Club’s achievements can be credited to their focus on the personal growth and development of each of their members, as well as their dedication to further understanding mediation techniques.

“We don’t go to competition to win,” said Shanken, “but to learn—and that’s why we win.”