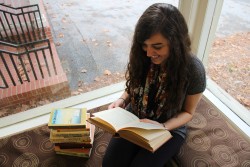 When Aleyna Rentz (English/writing and linguistics ’17) first signed up for Dr. Jessica Nastal-Dema’s writing studies class, she had no idea it would lead to her first publication in an academic journal. Along with Dr. Nastal-Dema and fellow writing and linguistics major Jayne McGaughey, Rentz co-wrote “The Evolving Identity of an Undergraduate Major in Writing and Linguistics,” which will appear in the fall 2015 edition of Composition Studies, the oldest independent periodical in its field.

The idea for the article began with a class discussion of college writing programs and how they should operate in order to best prepare students for careers or graduate programs in writing. During this discussion, Rentz realized just how exceptional Georgia Southern’s own writing department is.

“Unlike Georgia Southern, most colleges don’t offer majors in writing,” said Rentz. “They relegate it to a minor or concentration, rather than treating it like a legitimate field of study.”

This class discussion happened to coincide with the theme for the fall 2015 issue of Composition Studies, which exclusively called for papers about college writing programs. Rentz immediately saw this as an opportunity not only to venture into academic writing for the first time, but also to promote her department.

“I feel like our Writing and Linguistics Department might be Georgia Southern’s best-kept secret,” said Rentz. “We have an absolutely phenomenal program here, but very few people know about it—most students here don’t even realize it exists.”

Along with Dr. Nastal-Dema and Jayne McGaughey, Rentz sought to give the department the recognition it deserves. Together, they wrote an article discussing the scope of the Writing and Linguistics Department, as well as the issues of identity and structure that writing programs across the country must address. Rentz’s section of the article focused primarily on the benefits of the program’s loose structure. As one of the few freestanding writing departments in the country, and the only one in Georgia, the program offers four concentrations, giving students freedom to study whatever interests them—these include creative writing, writing studies, technical and professional writing, and linguistics. While Rentz’s primary focus is creative writing, specifically fiction, she acknowledges the importance of familiarizing oneself with all tenants of writing.

Rentz said, “One of the goals of our department is to mold students into well-rounded writers, but that doesn’t happen unless you look at your writing from all perspectives.”

In addition to promoting Georgia Southern’s Writing and Linguistics Department, Rentz hopes the article will help others recognize writing as a legitimate, freestanding academic field.

“I’m glad I go to a school that treats writing with the respect it deserves,” said Rentz. “Hopefully our article will inspire other schools to do the same.”