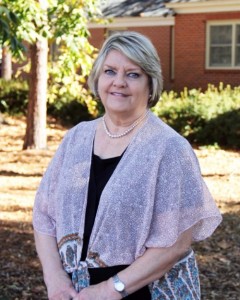 In the Eidson House kitchen, a sign tacked to the bulletin board reads “Please keep our kitchen clean! Remember…your mother doesn’t live here!” Under this admonition, an anonymous Honors student scribbled their rebuttal: “Mrs. Rushing is our mother! But she just works here.”

Even if she doesn’t literally live at the Eidson House, administrative assistant Linda Rushing has served as a maternal figure for students from both the Bell Honors Program and University Honors Program for the past fourteen years.

“When your family lives far away like mine, Linda’s like an extended family member,” said Alicia Carter (psychology/sociology ’15), one of the many students who frequently stop by the Eidson House. “She makes you feel at home.”

For many students like Carter, Rushing’s upcoming retirement feels more like a family member moving away. After all, Rushing has been part of the university system for the past thirty-one years. She first began working on campus in 1984 as part of the UGA Cooperative Extension Service, a job that found her in the Rosenwald Building helping coordinate conferences for agricultural specialists. In 1990, Rushing accepted her first position as a Georgia Southern employee at the newly-opened University Union, known to current students as the Russell Union. Her new job allowed her to experience the grand opening of Georgia Southern’s first student union.

“We’d never had anything like that building on campus before,” said Rushing. “I remember they invited celebrities and performers to the opening. It was so much fun to help with the grand opening.”

After seven years working for the director of the student union, Rushing moved into a secretary position under the Vice President of Student Affairs, Dr. Jack Nolan. This job inadvertently led her to the Honors Program.

“It was actually quite by accident,” Rushing said of her transition from Student Affairs to Honors.

When Dr. Nolan had to leave the University to tend to his wife’s health problems, his replacement came in with her own secretary, leaving Rushing without a job. She applied for several open positions on campus, including two part-time secretary jobs, one for the Bell Honors Program and the other for the University Honors Program, which were separate at the time. While she was surprised to get both positions, Dr. Hew Joiner, the Bell Honors Program Director, knew he wanted to hire Rushing the moment he spotted her name in the pool of applicants.

“I knew from what Dr. Nolan told me that she’d be a gem for Bell Honors—she was good with students and really cared about her job,” said Dr. Joiner. “I jumped at the chance to hire her, and she’s been in that chair ever since. I counted myself very lucky at that moment.”

Dr. Abell said, “She was a really big help when Bell Honors merged with the University Honors Program. She made the transition a lot easier for students.”

Since 2005, she has worked with Honors Director Dr. Steven Engel, the longest amount of time she has spent with any one supervisor.

“Linda has truly been the constant for the Honors Program since the turn of the century,” said Dr. Engel. “When she started with the program we had less than 200 honors students and now we have over 500.  She truly cares about the students and that has made all the difference for so many of them over the years.”

For Rushing, the students have made the past several years worthwhile.

“One of the best parts of my job is getting to help students, as well as get to know them,” said Rushing. “I’ve never had any student act rude or disrespectful towards me.”

According to Dr. Joiner, Rushing reciprocates that niceness: “She’s just really warm and outgoing and treats everyone nicely. It’s genuine, not an affectation. For some people, it’s a mask, but not with Linda. She just gets along with everyone.”

Carter echoes this: “She’s one of the friendliest people I know. She’s always interested in hearing about what’s going on in your life.”

In addition to befriending all the students, Rushing also seems to be acquainted with everyone at Georgia Southern.

“I really learned a lot from Linda, especially when it came to knowing who to call on campus whenever I needed something,” said Dr. Abell. “She always knew exactly who to get in touch with.”

Dr. Joiner agreed with this sentiment: “She literally knows everyone on campus.”

“At Georgia Southern, we talk often about the “small-feel” of the campus,” said Dr. Engel.  “Well, it’s people like Linda who give us that feeling. She cares for the students as individuals—often patiently listening to their concerns and worries. We will all miss her very much.”

In regard to Rushing’s relationships with everyone both in the Honors Program and across the University, it is easy to see why she initially had reservations about retiring.

“I never really planned to retire, but I think while I’m in good health I should get out and do things I don’t have time to do while I’m working,” said Rushing.

Her plans include visiting family and friends, volunteering at a local church camp this summer, and, perhaps most important, spending time with her two grandchildren, Cal and Lucy.

“Even though they’re little, we’ve already started talking about college,” said Rushing. “They said they’re coming here so they can live with me.”

While looking forward to spending retirement with her family, Rushing said she’ll miss the family she has within the Honors Program.

“The students I originally started working with are all grown up, and some are married and have children. Seeing what they accomplished after graduation is so awesome. They’re like my children,” said Rushing. “It’s a bittersweet goodbye when they leave, and I’m going to feel the same way when I leave.”

It will be a bittersweet goodbye for both the students and faculty in the Honors Program, as well, because for us, Linda isn’t just an administrative assistant, she’s family—even if she doesn’t actually live at the Eidson House.