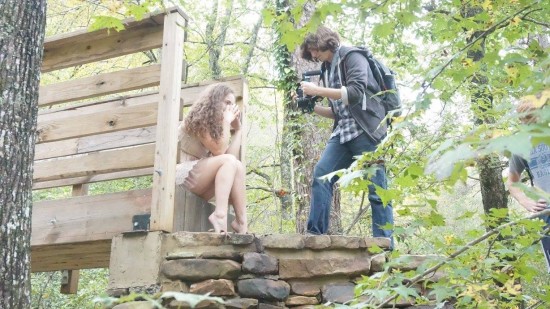 Connor Rentz on the set of his award-winning film, Spectrum

It is difficult to spot Connor Rentz (film and production ’19) without a camera in his hands. Between classes and on the weekends, Rentz can usually be found working on his latest short film, doing anything from editing the script to shooting scenes. Considering his commitment to and passion for filmmaking, it’s no surprise that Rentz’s latest short film, Spectrum, will be his first nationally distributed film. If you happen to find yourself on a Virgin America flight soon, you’ll be able to watch Spectrum on the airline’s in-flight entertainment system, Red, on their “best of the web” feature.

Rentz’s short film was one of five films chosen from the Jury Award winners of Campus Movie Fest, the world’s largest student film festival, to be screened by Virgin America, besting hundreds of other Jury Award-winning films from universities across the globe. Spectrum’s ascension into the sky, however, began at Georgia Southern.

“The idea for this short film came around when we first heard that Georgia Southern was participating in Campus Movie Fest,” said Rentz. “Since the rules required entries to be shorter than five minutes, I wanted to do something unique.”

Perhaps Rentz’s film stood out against the competition because of its unusual stylistic elements. Not only was it the only silent film chosen by Virgin America, but it also makes use of color symbolism, an artistic choice alluded to by the film’s title.

Of the film’s plot, Rentz said, “Spectrum is essentially a timeless love story—boy likes girl, boy gets separated from girl, boy and girl are reunited—told simply through colors and music.”

In spite of the script’s ostensible simplicity, filming called for an elaborate backdrop. Alongside David Besh, the film’s co-editor and producer, Rentz travelled to Lookout Mountain, Georgia, where he enlisted high school friends to help him with the shoot at Lula Lake Land Trust, a picturesque nature reserve that boasts, among other natural wonders, a 100-foot waterfall. Shooting at Lula Lake involved a bit of luck; as a nonprofit location, it is only open to the public two Saturdays each month. Luckily for Rentz and his crew, they happened to find themselves at Lula Lake during its “Founders’ Weekend,” the only weekend during the year when it is opened two days in a row.

“We were incredibly lucky we were there at the right time, because Lula Lake perfectly matched the script, allowing for a dynamic range of natural scenery,” said Rentz. “The staff was also incredibly supportive of our shoot and eager to help us. We’re proud to have made the first film ever shot at Lula Lake.”

After editing the film, Rentz submitted it to Campus Movie Fest, where it competed against around forty other films created by Georgia Southern students. Not only was Spectrum named one of the four Jury Award winners, but it also won two Silver Tripod Awards—the only film to do so—for Best Production Design and Best Special Effects. This victory allows Rentz to compete in the Grand Finale, which will be held this summer, as well as potentially attend a screening at the Cannes Film Festival in France. Seeing his film featured on Virgin America flights was an unexpected perk, albeit Rentz’s favorite part of his Campus Movie Fest experience.

“It’s amazing to have this type of success as a college freshman,” Rentz said. “Finally, I can say that a film of mine is ‘now playing.’”

You can watch the film here: https://www.youtube.com/watch?v=AAGkHNU84Zc