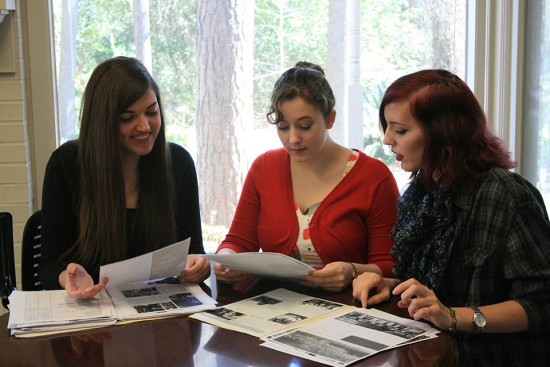 With hundreds of literary magazines in circulation and thousands of writers peddling their prose and poetry, sometimes writing can feel like shouting into an echo chamber. Short stories languish in obscure magazines; journals go under a month after their conception. While breaking into the literary scene can be a daunting expedition, four Writing and Linguistic majors, three of them Honors students, joined creative forces to found a publication with potential staying power. Over Christmas break, Ben Baker, Devan Pride, Kristen Flippo, and Aleyna Rentz created Moonglasses Magazine, a bimonthly online journal devoted to humorous, experimental writing.

“It all started with Ben,” Flippo (’16) said. “He’s one of the funniest, most talented writers in our department, but all his fiction is so weird that it doesn’t quite fit the traditional aesthetic of most literary journals, so we thought, why not fill that space by creating our own journal?”

After coming up with a clear focus for the magazine, the students were eager to begin working on it right away.

Getting Moonglasses off the ground involved meticulous planning; its founders had to decide on its aesthetic, submission guidelines, and publication dates, among other details. Writing and Linguistics professor Jared Yates Sexton provided guidance and feedback during the process of creating the magazine.

“It’s valuable for students to be involved in projects like this,” Sexton said. “It gives them the opportunity to see the other side of publishing and learn firsthand how literary journals function. I’m proud of the initiative these guys took, and I can’t wait to see where Moonglasses goes next.”

After a few weeks of intense work, including web design and writing content for the website’s masthead and about sections, Moonglasses Magazine was ready to accept submissions. With listings on Duotrope, Entropy Magazine’s “Where to Submit” list, and the support of several other literary journals and writers on Twitter, the magazine found contributors almost immediately.

“As soon as we opened submissions, we got tons of writing right away,” said Rentz (’17). “We did not expect such a massive response in such a short amount of time.”

Reading through so many short stories and poems and choosing which ones were suited for publication proved challenging, according to Flippo.

“The hardest part was choosing who gets accepted and who doesn’t. We received lots of great work, so it’s hard to pick, especially because humor is subjective. Also, lots of times people will submit things that are beautifully written but not our style, so it’s hard to reject them.”

Another difficulty in running a journal while balancing schoolwork is time management. Reading submissions, updating social media, and keeping the website running smoothly requires hours of hard work each week, a time commitment Pride says is ultimately worth it.

“You just have to set aside certain times for getting things done,” Pride said. “This is something that has the potential to break into the literary world, so we need to devote ourselves one-hundred percent to it.”

Their hard work paid off: On February 1st, the first issue of Moonglasses was released, featuring the work of several established writers.

“I was so excited for our first issue,” Flippo said. “It was just a few days before my birthday, so it was like an early birthday present for me.”

Rentz said, “This just proved to me that if you want to do something, all you have to do is commit yourself to it and go for it.”

With several pieces lined up for their next issue, due out in April, the editors are optimistic for the future of Moonglasses.

“I can see us really expanding in the future. I’d like for us to start accepting artwork, maybe eventually run a print edition,” said Pride.

“Working on this magazine with my friends has been such a fun, rewarding experience,” said Flippo. “I just want Moonglasses to bring as much joy to our readers as it brings to us.”