In Statesboro, hundreds of poverty-stricken individuals receive free and life-saving healthcare at the Hearts and Hands Clinic, a place that would not exist were it not for an idea that struck Honors Alumnus Andres Montes (’10) when he was only a college junior. He recently returned to campus to speak to Honors students not only about this project, but also about the positive impact studying humanities can have on pre-med students. Montes himself majored in philosophy while at Georgia Southern, a course of study he did not choose until later in his college career.

“I actually entered college as a business major,” Montes said. “It took me a while to figure out what I wanted to study, but I’ve always enjoyed philosophy, so I decided to make it my major.”

Even with a minor in chemistry, Montes’ decision to focus his studies on a liberal arts subject while pursuing a career in medicine might seem unorthodox. However, Montes quickly dispelled the false notion that a liberal arts background cannot contribute to a pre-med student’s education in a meaningful way. 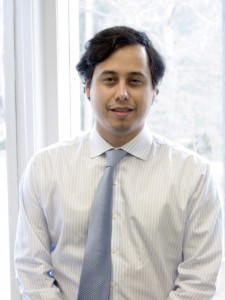 just numbers instead of people. Philosophy has helped me see something beyond that, to really empathize with the people I work with.”

This compassion and understanding for others undoubtedly catalyzed Montes’ desire to provide free healthcare to Bulloch County’s medically-uninsured citizens, an idea also inspired by the 2008 presidential election.

“Because our country was involved in a huge conversation about healthcare, my friends and I wondered if there was anything we could do around here to help. A free healthcare clinic seemed like the best way to go,” said Montes.

Opening a nonprofit is no easy feat, especially while balancing a rigorous college career, but through diligent planning and help from the community, Montes was able to make his dream a reality within a little over a year. Individuals from all over the county—professors, community leaders, lawyers, accountants, and students, among others—combined their unique talents and specialties to help bring the Hearts and Hands Clinic to life.

“We were fortunate to have so many experienced people on board,” he said. “The really beautiful thing about it, though, was how many students got involved. They really wanted this project to succeed.”

After several months of hard work, the Hearts and Hands Clinic opened during September 2010 at the Son’s Light Fellowship Baptist Church on Highway 301. The clinic proved to be such a positive force in the community that it quickly outgrew its original space; it has since moved to downtown Statesboro. For six years, it has provided free primary health services for citizens of Bulloch County who are medically uninsured and have an income at or below 200% of the federal poverty guideline, cultivating hope and empathy along the way.

Currently, Montes is an M.D. candidate in the Mercer University School of Medicine (’17) and is completing an outpatient family practice rotation in Statesboro with plans on pursuing a residency in Obstetrics and Gynecology. Not only that, but he also sits on the Board of Directors for the Coastal Georgia affiliate of Susan G. Komen®.  Montes stepped down as chair of the clinic’s board at the start of medical school, and remains inspired by the current clinic leadership as he stays engaged as an emeritus board member.

“We’ve heard amazing stories from patients. For example, many of them had illnesses detected early at our clinic and were able to prevent them from getting worse,” said Montes. “It’s incredible knowing that we’re actually changing lives.”