Focused on the Target

Cassy Pelton knows that she needs to keep her eye on the target whether she is working on research for her Honors Thesis, training at the Shooting Sports Education Center at Georgia Southern, presiding over Georgia Southern’s Archery Club, or preparing for the World Indoor Archery Championship this month in Ankara, Turkey.

Pelton (biology/pre-med ’18) first fell in love with archery the summer before her freshman year of high school. After returning from Germany to Georgia, she stayed with her grandparents in Florida while her parents looked for a house near Fort Stewart. One day, her grandfather handed her a bow and arrow, and she was hooked. 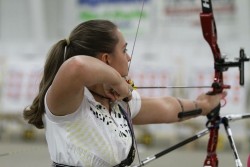 “I completely fell in love,” said Pelton, “but I didn’t consider shooting with a team until I attended a local wildlife festival. The 4-H Club had an archery booth, and after I shot an arrow, they told me I should join the high school archery team. The rest is history.”

Since then, Pelton has progressed rapidly, going all the way to the World Indoor Archery Team Trials in Lansing, Michigan recently, where she won a tiebreaker for third place.

Pelton said, “I was under the highest pressure I’d ever felt, but that just made my victory even sweeter.”

In competing on the international level against archers from all across the globe, Pelton hopes to prepare for her main goal—competing in the 2020 Olympics.

“I think the competition in Turkey is a great stepping stone,” she said. “Lots of athletes who eventually compete in the Olympics start at international competitions like this one, and it would definitely be helpful to have archery experience outside of the United States before going to the Olympics.”

Maintaining a strong academic record, especially while on the pre-med track, and training for a major athletic competition both require focus, something Pelton applies to both archery and research.

“Many of the projects in the lab right now are dealing with altering genes in the brains of zebra fish and observing how the fish develop,” said Pelton. “Even though we’re still in the beginning stages of research, I’m excited to see how this research develops and relates back to my studies.”

For anyone who wants to watch Pelton in the Archery Championship, the competition will be streamed online at archery.tv February 29 through March 7.