Winning an Award, Earning a Job 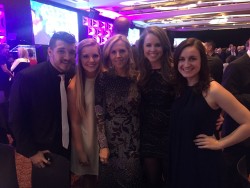 “It was pretty intimidating being in a room full of important people; everyone in that room was a CEO. I even got to meet famous designer Tory Burch!”

Yancey first heard about the scholarship from Dr. Trey Denton, Honors Coordinator for the College of Business, who recommended her for the award.

Dr. Denton directed her to Dr. Kathleen Gruben, who helped her complete her application, which consisted of an essay about how Yancey saw herself going into retail in the future. The plans she outlined in that essay have quickly become a reality.

Yancey attended a career fair while on her trip to New York and had the opportunity to speak with Ryan Foster, the Senior Director of Replenishment at Walmart. He spoke in front of a large group of students, but Yancey knew she was only one of two students in attendance who had a focus on logistics and made a point to introduce herself directly. That initiative opened up a new opportunity for her.

“He was very excited and we talked for a minute before he said that he knew he needed to interview me. We set up a time, went through the interview, and he hired me after one interview,” said Yancey. “I will be traveling to Bentonville, AK this Spring Break to tour their facility and finish up some paperwork. I will be starting June of 2017. I’m very excited for this opportunity.”

Yancey feels extremely grateful to already have a job lined up after graduation.

“I’m nervous but excited,” she said of this opportunity. “I can’t wait to see what this new adventure will bring!