Collin Daly’s (electrical engineering ’16) honors thesis deals with a problem we have all encountered—video buffering on the Internet. Many Netflix binges have been interrupted due to that pesky rotating circle, signifying a discrepancy between the bandwidth needed to play the video and the bandwidth that’s actually available, but Daly’s research strives to find a solution. His thesis, entitled “Predicting H.265 Video Traffic Using Neural Networks,” deals with using artificial neural networks to replicate the way the mind solves a problem in order to predict the amount of networking space the bandwidth requires to stream high-definition video. Surprisingly, this field of research is still in its nascent stages.

“The video coding format we’re working with is almost brand new,” said Daly. “The number of papers relating to this are almost nonexistent. It’s something new that has a lot of potential that we’re trying to move forward with.” 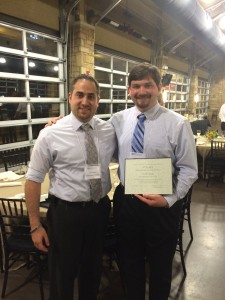 Colin Daly shows of his award with his faculty mentor Dr. Rami Haddad.

While this line of study is still developing, its importance should not be underestimated; within the next four to five years, Cisco predicts that multimedia, particularly high-definition video, will account for nearly all of the Internet’s traffic. Currently, networks cannot sustain that level of activity, so Daly has tasked himself with trying to figure out how to break this data into smaller, sustainable chunks.

Daly said, “We’re using neural networks to replicate how the brain works. In other words, we’re using many slower, more accurate calculations at the same time rather than a series of faster, less efficient, and more error-prone calculations so we can figure out how much bandwidth is required to play high-def videos without waiting for them to buffer.”

This experiment involved comparing two different styles of network, a recurrent system using error correction, and one that did not. Of the two, the former proved to be a much better system and will be used as a basis for further research.

In the meantime, Daly took his findings to both the Georgia Collegiate Honors Council conference at Augusta University and the American Society for Engineering Education (ASEE) conference at the University of Alabama in Tuscaloosa. At both meetings, Daly had the distinction of being the only undergraduate representing Georgia Southern.

“Attending both conferences gave me a lot of perspective,” said Daly. “The engineering conference was obviously much more tailored to my project, so there was much more general interest and many technical questions. It was interesting to see the other side at the general honors conference, though, because you get feedback from students coming from different disciplines, bringing fresh perspectives to your project.”

Daly’s hard work won him second place in the undergraduate research division of the ASEE conference, an award well-deserved.

“Conferences like these are really encouraging,” he said. “They give you the opportunity to realize that there is an outlet for research, and that we can contribute to conversations in our fields in meaningful ways.”