A Clear Path on Cumberland Island

The slam of a machete against the trunk of a tree. The sharp clip of a lopper. The soft hum of a saw. These sounds provided the soundtrack for this May’s Honors alternative break trip. Under the leadership of faculty mentor Dr. John Peden and Cumberland Island volunteer coordinator Laura Buckmaster, seventeen Honors students spent five days camping on Cumberland Island while helping to make it a more accessible place for visitors.

The group worked hard in the May heat and humidity to make one of the overgrown trails walkable for the island’s visitors. Each person had either a lopper, a saw, or a rake with which to widen the trail, which stretches two miles inland from the beach. The hardest task that the group faced was pulling down a never-ending wall of vines that had overtaken the trail. Though this task was difficult, teamwork made it possible to complete.

“Working on the trail was overwhelming and physically demanding, but also really rewarding when we were able to look down it and see all of our progress,” said Abby Slattery.

In their down time, students were able to learn about Cumberland Island’s history and natural environment. They explored several of the famous Carnegie family houses located on the island, 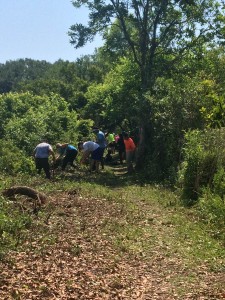 such as Plum Orchard and The Dungeness Ruins. They also saw the island’s fourth sea turtle nest out of an expected 500 to 700 nests for the year.

Caitlin Hall said, “My favorite part of the trip was getting to hold a sea turtle egg, because not many people get to have that experience.”

In addition to the sea turtles, the campers encountered lots of other wildlife, including several snakes, an alligator with her newly-hatched young, and the wild horses for which Cumberland Island is famous. Buckmaster explained their origin. “There is a stable population of 125 horses on the Island. They were brought over by the Carnegies as farm horses and never left.”

After three nights on the Island, the group camped on the mainland in preparation for an early morning of sea kayaking. They spent around three hours on the ocean, kayaking a total of eight miles and passing landmarks including the Saint Simon’s Sound and Fancy Bluff Creek.

Afterwards, they ended the trip with a last meal together and reminisced over the week. Trip leaders Leah Anderson and Garrett Metropol were grateful for the opportunity to work with such an enthusiastic group. Anderson said, “Everything we did was strenuous work, whether it be sea kayaking or clearing trails. No matter what, everyone was awesome and had great attitudes.”

Metropol agreed, “It was really enjoyable. Everyone wanted to help with anything before we even asked.”

One of the greatest takeaways from the trip was personal and group growth. Cara Perrella said, “I went on this trip to push myself and try new things, and I didn’t expect to like it as much as I did.” For many people, this was their first time camping, and the new and experienced campers helped each other along the way, whether it be setting up a tent, helping make dinner or stuffing a sleeping bag into its tote. Slattery said, “Everyone was really comfortable with one another and was able to show their true personalities.”

This opportunity to meet and work with more students within the Honors Program was something Abi Johnson did not take for granted. “My favorite thing about this week was getting to meet more people in the Honors Program because after freshman year, it is harder to get to know the new incoming students,” she said. 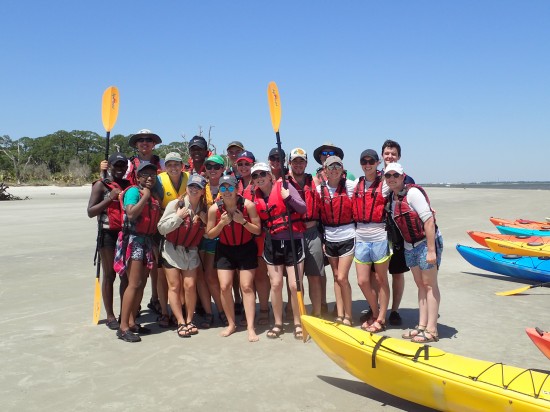