Honors alumna Alicia Carter (psychology and sociology ’15) presented her thesis research at the Association for Psychological Science’s 28th Annual Convention in Chicago this summer.  Among the 4,000 participants engaged in workshops, lectures, and symposiums, Carter delivered a poster presentation on research concerning the interactions between different types and facets of mindfulness, popularity measures (specifically neuroticism and subjective happiness), and alcohol use in a population of college students. 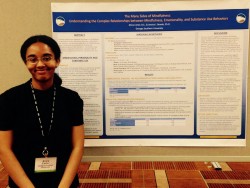 “Mindfulness, as a concept, has been defined in several, sometimes contradictory ways, which makes comparisons of mindfulness studies very difficult,” said Carter. “That being said, the idea behind my study was that we would use several mindfulness measures—as opposed to just one—to answer our research questions.”

While presenting her poster, Carter had to field questions from professors and students, who in turn offered detailed feedback. Her proudest moments, she said, were when a graduate student expressed surprise that she had done her research as an undergraduate, and when her advisor, Dr. Jessica Brooks, told her she did well.

Carter said, “The experience was invigorating. I felt wonderfully overwhelmed, if that makes any sense, because I was surrounded by so many people—from different universities, states, and even countries—who were all connected by the same discipline. Coupled with the fact that this was my first plane trip, it was certainly unforgettable!”

“I’m still deciding where to go,” Carter said, “but thankfully my former GS advisors and professors have been in my corner, helping me along.