A Summer Internship with Turtles

This summer, Anne DeLua (geology ’17) spent two months as an intern on St. Catherine’s Island, a privately-owned island fifty miles south of Savannah dedicated to research and conservation. Run by the St. Catherine’s Island Foundation, the island is not open to the public. Instead, its only human activity comes from professors and students, many of them from Georgia Southern, who visit the island to participate in classes, internships, and various conservation projects. Conservation of endangered wildlife is the St. Catherine’s Island Foundation’s chief concern. In fact, they even work with the New York Zoological Society, occasionally hosting their endangered animals and working to increase their numbers. During DeLua’s internship, the island was home to several ring-tailed lemurs given free range of the island’s 14,640 acres, which they shared with alligators, who were frequently sighted waddling around the island, taking unexpected dips in the ocean and once even holding up traffic.

The main attraction for DeLua, however, was the sea turtles.

As a sea turtle conservation researcher in St. Catherine Island’s Sea Turtle Conversation Program, DeLua took part in an effort to preserve the country’s dwindling sea turtle population. She spent each day searching the beach for signs of sea turtle nests, which are usually concealed by sand. Once she spotted signs of a nest, DeLua had to dig until she found it, and then either mark its location or move it to a place where it would not easily get washed away by high tide.

“The beaches on St. Catherine’s Island are eroding badly,” said DeLua, “so the sea turtles there often put their nests in places that would’ve been okay a couple of years ago, but aren’t any more. So we had to move them and make sure they were in safe spots.”

After saving the nests, DeLua also had to count the hatchlings and help them out to sea, which was her favorite part of the experience. 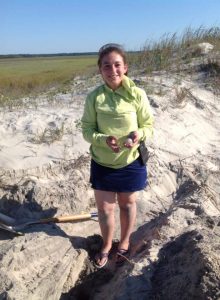 “Finding your first nest is great, but it’s really rewarding to see the baby turtles safely returned to their environment,” she said.

DeLua was part of a forty year effort by St. Catherine’s Island to take sea turtles off the endangered species list. Fortunately, the population of sea turtles is currently on the rise, and DeLua reported that the Sea Turtle Conservation Program enjoyed a record-breaking year, saving more nests than they ever have before.

By acquainting herself with the island this summer, DeLua was also able to get a head start on her honors thesis.

“I’m actually going to be doing research with the geology department on the island for my honors thesis,” said DeLua. “So this was really great, because I got to know the island beforehand. I’ll keep working there this year, just not with sea turtles. Instead I’ll be doing geophysics.”

DeLua’s honors thesis will involve many wells Georgia Southern keeps on the island’s interior, which are inexplicably filling up with salt water. Using ground-penetrating radar, DeLua hopes to discover the source of the salt water intrusion and its cause.

Even though her research will not bring her into contact with turtles again, DeLua still feels fortunate she had a chance to participate in a conservation project.

“I’m interested in conservation in general,” said DeLua. “I think everyone should help conserve, and this was my chance to be able to help out, make the world a better place, and save some sea turtles.”