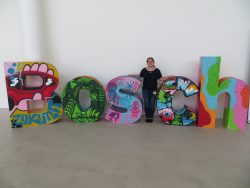 Jenny Shaffer (German/Mechanical Engineering ‘17) spent her third summer in Germany gaining professional experience through the Materials Science Internship at Robert Bosch GmbH Center and Research and Advanced Engineering in Renningen. This highly competitive internship only accepts roughly thirty graduate students or alumni of the Deutscher Akademischer Austauschdienst Research Internship in Science and Engineering (DAAD RISE) Germany program, a program Shaffer participated in during summer 2015 at Ruhr-Universität in Bochum. Shaffer’s exemplary work from the previous summer provided her with skills to succeed in this advanced, graduate level internship.

Shaffer’s roles included “designing and implementing experiments to program the global conditions inside a corrosion chamber and comparing the effects of the local environmental load on the corrosion rates of stainless steel, aluminum, and titanium parts inside the chamber.” Shaffer felt that she had “freedom to design and test [her] own experiments.”

The professional atmosphere provided Shaffer with real life experiences of what a career in engineering has to offer. Working at the Robert Bosch GmbH Center, Shaffer utilized her classroom knowledge to flourish in a corporate environment. “This trip felt more like a ‘trial run’ if I were to actually live and work in Germany someday,” said Shaffer.

Because she took part in the internship program twice, Shaffer was invited to serve as keynote speaker for the 2016 DAAD RISE conference on July 7-9, 2016 in Heidelberg, Germany, a conference whose audience included the program’s current students, employees, and dignitaries from the US, British, and Canadian embassies, including the US Consul General from the Frankfurt general consulate.

“The purpose of the presentation was to show an alumna’s perspective of the DAAD RISE Germany and RISE Professional programs and emphasize the importance of cultural exchange in our increasingly global society,” said Shaffer. “I went over my research from both internships and then encouraged students to pursue their passions overseas and network with their peers from the programs.”

However, the trip was not entirely focused on working for the internship. Shaffer was able to experience the city’s culture, while forming relationships with others. The city of Renningen provides both “pre-war and modern architecture.” Shaffer explained, “Many of the historical castles and buildings were reconstructed after being destroyed in the Allied air raids during WWII, and these buildings stand next to modern buildings in a hodgepodge of culture in the city center.” 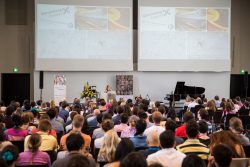 Shaffer addressing the DAAD Conference in Heidelberg as keynote speaker.

Shaffer’s studies of the German language at Georgia Southern University, and a DAAD scholarship to Germany after her freshmen year,  prepared her for tackling the language barrier. Working in a technological environment provided her with a new set of specialized terms related to her topic of study. “My coworkers were super sweet, and they would discuss a wide array of topics at the cantina each day, from politics to healthcare to philosophy to food,” said Shaffer.

Her journey this summer was not confined to her work. While traveling throughout Germany, she made new friendships that will last beyond the weeks spent interning.

One day, Shaffer was traveling by train, when a small engine fire caused an evacuation. She was left to spend four hours in a small town, which she used to her advantage and “ended up meeting two wonderful ladies, one of which who ended up giving [her] a ride home and becoming a pen pal! Deutsche Bahn [the town] certainly knows how to make memories,” said Shaffer.

Spending a summer abroad is an amazing experience, but spending three summers abroad is a chance of a lifetime. Shaffer’s advice to students who are looking for adventures abroad is to simply apply. “Never pass up an opportunity simply because you think the odds are low.”