The best way to learn about a culture is to immerse oneself in it. For five honors students studying abroad in Argentina this summer, this meant exploring neighborhoods in Buenos Aires, marveling at waterfalls, tutoring local children, and even taking a little time to pursue individual research. Kyle Hess, Bernadette O’Donnell, Sophia Fleri, Malik Raymond, and Derrick Herrin were among several Georgia Southern students who took part in the Foreign Language Department’s study abroad program to Argentina, which focused on building students’ speaking and comprehension skills in Spanish.

For Sophia Fleri (mechanical engineering ’19), signing up for the trip was a no-brainer. “I went to the study abroad fair knowing I wanted to travel to a Spanish-speaking country. I had already been to Buenos Aires before during a mission trip to Las Termas del Rio Hondo in Northern Argentina, and I decided I really wanted to go back again.” 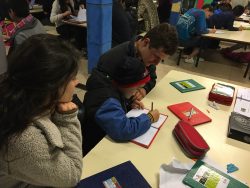 Sophia Fleri and Kyle Hess help lead classroom activities at a school in The Villas, an underprivileged Buenos Aires neighborhood.

Derrick Herrin (mechanical engineering ’17) had a similar experience. While he had not visited Argentina before, an honors alternative spring break trip in Costa Rica left him with the desire to return to another Spanish-speaking country.

“My senior year was coming up, and I realized if I wanted to graduate with no regrets, then I needed to study abroad,” he said.

Both students also wanted to improve their Spanish abilities during their summer abroad, a goal Malik Raymond (history ’17) had, as well. However, Raymond also had other plans—conducting research. He studied Buenos Aires’ population of Afro-Porteños, citizens of African descent, during the late 19th century. His interest in their culture began last spring when he discovered their poetry.

“During the previous spring, I went to Argentina’s national archival website and found poems that weren’t translated into English. I was trying to build up my Spanish by reading and translating the poems, and it occurred to me that maybe I could do something in that vein for my honors thesis,” said Raymond. “However, since I’m a history major and writing’s only my minor, I couldn’t, but I still wanted to do research on the history of the Afro-Porteños around the time period during which the poems were written, which was around the late 1870s and early 1880s.”

His research included visiting the National Library of Buenos Aires, which had an exhibit on the Afro-Porteños currently on display. It featured newspapers the Afro-Porteños had licensed themselves, filled with articles, poems, and other miscellaneous writings.

In spite of his busy research schedule, Raymond still had time to enjoy other activities in which the group took part. Places visited included a street museum called Paseo de la Cartoon, which pays homage to the characters of famous Argentine comics; the La Boca neighborhood, where the famous Boca Juniors soccer team is located; and several art museums and shopping districts. As a writing minor, Raymond enjoyed being in a place famous for having more bookstores per block than any other city in the world.

“I got lost there trying to find particular books that I wanted,” Raymond said. “It was a great place to explore.”

After acquainting themselves with the city, Herrin says they also got to know some of the local population.

“We helped tutor a group of underprivileged kids in English and Math. I really enjoyed that opportunity. It was a good way become more than a typical tourist and experience a more extensive range of Argentiño culture.”

When asked about his favorite part of the experience, Herrin said, “I really enjoyed talking with the people of Argentina about their culture, history, and so much more. Not only was I learning from them, but they were learning from me about US culture, history, etc. We compared our countries and cultures in a very refreshing, nonjudgmental way that put aside the cultural boundaries in favor of understanding of each other.”

Fleri undoubtedly enjoyed her experiences, as well, for she opted to stay in Las Termas del Rio Hondo for two weeks after the program ended.

“I highly encourage anyone studying Spanish to go on study abroad, but go early,” she said. “Don’t wait, because you have fewer opportunities as time goes by. I promise it’s worth it.”