For many undergraduates, summer is the optimal time to participate in research. Through ten-week summer programs called Research Experiences for Undergraduates (REUs), STEM majors get the chance to put their education into action at both esteemed research universities and stand-alone research laboratories funded by the National Science Foundation (NSF). Three honors students recently took advantage of these opportunities, which found them scattered across the country. Mattie Brasleton (chemistry ’18) was stationed at Vanderbilt University, while Nick Shuber (chemistry and Spanish ’17) worked with professors at Indiana University. Rather than spending his summer at a university, Reid Loveless (biology ’18) ventured off the coast of Maine to Mount Desert Island, site of the MDI Biological Laboratory.

For Brasleton, pursuing an REU was a way for her to clarify her career path. Vanderbilt exposed her to the pharmaceutical side of chemistry, where she worked alongside Dr. Eva Harth on multi-component injectable hydrogels for dual drug release. This project culminated in a presentation at the 14th Annual Research Symposium in the Robinson Research Building at Vanderbilt University.

“It was kind of overwhelming presenting my research at first,” Brasleton said. “After the first few people came up and asked about my work, I knew what I wanted to say, and it became a much more enjoyable experience.”

While Brasleton’s research stayed within the field of chemistry, Shuber’s summer in Indiana allowed him to explore other sciences outside his chemistry major through experimentation with an unusual piece of technology—a laser made from virus capsids.

“The program I did was for materials science, so we were all making something,” said Shuber. “Some groups were making solar panels, while others were making macro molecules or testing types of equipment. My primary investigator (PI) was actually a physicist, and I’m a chemist, and the project we were working on was biological, so we were doing a biophysical chemistry lab.” 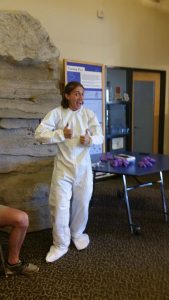 Nick Shuber getting ready in the lab.

As a research associate, Shuber worked alongside his PI and several graduate students to make lasers from gold nanoparticles and virus capsids. While such materials might seem strange, they actually have their advantages. Virus capsules can disassemble and reassemble through simple changes in environment, so one can easily manipulate a capsule’s environment to make it assemble around a gold nanoparticle. Molecules placed on the outside of this structure fluoresce under certain types of light, making it able to shoot amplified lasers.

Shuber explained the importance of such an invention: “A lot of people are looking at them for cancer surgery because they emit light, so if you shine light on them, they’ll emit even brighter light. They’ve already got proteins that can seek out cancer cells, and if you attach that on the outside of the virus capsid, the viruses will seek the cancer cell, and if you shine a light, the cancer cells will light up like a Christmas tree, making them easier to identify and remove. The laser may also be strong enough to kill cancer cells that are too small to be removed by surgery.”

Loveless also participated in biological research this summer, spending his time at the MDI Biological Laboratory, which is devoted to improving human health by making strides in biomedical research and education. Offering a wide range of courses and facilities, MDIBL brings together diverse sets of students and scientists year round. While Loveless was there, for example, he shared the research facility with Yale’s first-year medical students.

His research focused on cellular physiology, specifically the volume-regulated anion channel (VRAC), a transmembrane channel that is ubiquitously expressed in all vertebrate cells and plays a central role in the regulation of cell volume.

“There’s not much known about the formation of the channel,” said Loveless. “We know that it’s composed of five LRRC8A-E proteins and that different combinations of these proteins give rise to channels with different functional properties. Exactly which combination leads to which functional property and how cells are able to tailor the channel to best suit their physiological needs is something we are still trying to figure out.”

He further emphasized the importance of this research: “Furthering knowledge of VRAC and gaining a better understanding to its molecular processes holds the potential for future drug therapies that specifically target VRAC function, especially in cancer and stroke patients.” 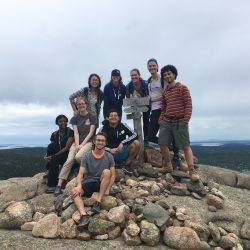 Reid Loveless with his teammates at MDI.

In addition to conducting research, Loveless was able to attend several workshops on topics ranging from bioethics to bio-entrepreneurship.

He said, “The whole experience really opened my eyes to what research is about. It connected me to a lot of like-minded peers, great mentors, and people who I know I can call if I have a question or possibly wish to collaborate with on future research projects. I would recommend it to anyone interested in research.”

This is a point with which Shuber concurs: “REUs are a great way to test the waters for grad school. They expose you to things you wouldn’t normally encounter about your field because you’re out there. You can talk to other grad students, because you’re in their offices with them for 10 weeks. So you can chat with them, see where they are. I’m able to make a more educated decision on where I want to go for grad school and what I want to study based on my experience.”

Even though Brasleton’s experience did not give her a better idea of what kind of job she would like to have after graduation, she still gained essential research skills from her REU.

“I learned so much while I was at Vanderbilt. I gained better lab techniques that I can use here with the research I do here, as well as better professional writing skills. It was truly a productive and educational ten weeks.”