In an election whose unofficial slogan might be “vote your conscience,” third parties have experienced a sudden surge in popularity. Voters troubled by Trump’s behavior and Clinton’s political history have looked to the Libertarian and Green parties in particular for recourse, but several issues stand between these parties’ presidential nominees and the White House.  Is it pragmatic, or even ethical, to vote for a third party candidate this year? Why have third parties at all if the Electoral College system virtually blocks them from a legitimate chance at the presidency? Are this year’s candidates even worth voting for?

These are just a few of the many questions students in Dr. Christopher Caplinger’s Honors FYE course, Modern Political Debate, have considered in the past several weeks, leading them to host a Third Party Forum that took place on October 18th in the Nessmith-Lane ballroom.

“The way the course is set up, the students’ engagement project as part of the honors program is for them to be involved in voters’ registration and education,” Dr. Caplinger said. “Some of the things they’re doing include working tables to register people to vote, staffing early voting locations on campus, and educating other students about local candidates.”

Students were also required to create a forum surrounding voting or the election, an idea that began with Jarvis Steele (philosophy and political science ’19), the course’s Peer Leader. As a student in last year’s Modern Political Debate class, Steele had attempted to stage a similar forum, but could not get it off the ground. This year, however, with the support of students Patrick Maddi (international studies ’20) and Bryce Colvin (political science ’20), Steele saw his vision become reality.

“Last semester when I was in [the students’] shoes, I thought a forum would be the best, most responsible way to start a conversation about voter registration, and then the booths, the tabling, the flyers, the advertisements, those would be the next step. I feel like we skipped a step last year, so the forum really helped us go back and cover that base,” Steele said. 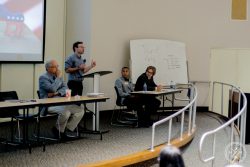 Rather than discuss voter registration, Maddi decided it would be more productive in this year’s political climate to talk about third parties. Colvin agreed: “In such a controversial election, there are so many people who feel like they’re having to hold their nose and vote, so we wanted to raise awareness that there are other options out there. Obviously, third parties don’t run to win elections, because that’s just not feasible; instead, they run to raise awareness on issues that the media doesn’t cover.”

With media outlets focusing more on Trump’s gaffes than actual issues, the Third Party Forum provided a much-needed comprehensive overview of third party platforms and issues surrounding them. With Dr. Caplinger’s guidance, Colvin and Maddi carefully chose five professors to speak at the event, a list that included political science professors Dr. Joshua Kennedy, Dr. Patrick Novotny, and Dr. William Biebuyck, history professor Dr. James Woods, and writing and linguistics professor Jared Sexton, who had perhaps the most unusual perspective on this year’s election. With op-ed pieces in The New York Times and The New Republic, Sexton’s coverage of the election, particularly Trump rallies, has recently become a phenomenon. In addition to attending the forum, he also served as a guest lecturer in Dr. Caplinger’s class.

Colvin said, “Sexton was a guest speaker in our class, and that’s one of the reasons why we wanted him involved. He talked about what he’s seen attending the different rallies and where he thinks the political atmosphere is headed in the next election, the next generation. He’d also been to the Green Party National Convention, so we thought it’d be interesting to hear about third parties from someone who’d encountered them up close.”

Although Steele wasn’t involved in selecting the professors, he was pleased with the outcome.

“The professors that they got to come out were excellent,” he said. “Their expertise really helped develop the forum, and the shape and context they provided for these issues honestly couldn’t be topped.”

The audience undoubtedly agreed, for they responded to the forum with enthusiasm, according to Colvin.

“People were very attentive. I handled the vetting of the questions while Jarvis was moderating. And the majority of the questions we got were educated and people seemed to be really interested in it. It was exciting to see people take political activism, to take time out of their day to go attend something.”

With several service hours left to fill, Steele and Colvin hope they can host more events like this in the future.

“The next step would be to go back to the drawing board, see what we can fix, workshop it, bring it back. Make a series of panels,” Steele said.

For now, Colvin is content with the success of the Third Party Forum. “To me, voter education is one of the most important issues we’re facing right now. If we inspired even just one person to do their own research, to look into third parties and educate themselves, I feel like we won.”