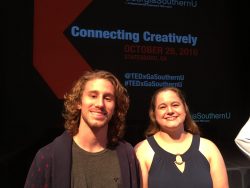 Finding creative solutions to the world’s problems is a goal shared among students in the Honors Program, and all of our students at some point present their ideas in a public forum.  Two students recently engaged that public forum on a global scale as they discussed their research and experiences on the TEDx stage. Jenny Shaffer (German/mechanical engineering ‘17) and Reid Loveless (biology ’18) gave talks at the event, and they were joined by a number of other speakers from across campus and the community, including Dr. Steven Engel, the director of the Honors Program.

TEDx is a program devoted to sparking discussion and deep thinking in local communities and on college campuses. (TED is an acronym for Technology Entertainment Design.) The theme at Georgia Southern was “Connecting Creatively,” and the three speakers shared their own unique perspectives on using creativity as a problem-solving tool and means to approach the various issues facing our world. Shaffer incorporated her three summers researching and working in Germany into her talk.

“I talked about how living abroad can change your perspectives on common issues and problem-solving in the context of culture,” Shaffer said. “I’m incredibly grateful to have had the opportunity to share what were hopefully some thought-provoking ideas.”

Loveless’ speech challenged the notion that art and science are mutually exclusive disciplines.

He said, “I discussed some of the similarities between artists and scientists, how both benefit from working together, and how connecting the two connects the community with art and science as a whole.”

As a political philosophy scholar, Dr. Engel brought Socrates into his discussion of the creative power of conflict, arguing for the necessity of “gadflies” in society, or people who provoke dissension and force others to consider new ideas. His favorite part of the afternoon was not giving his talk, but having the opportunity to watch honors students share knowledge gained from their own experiences.

“I think it’s great to share the stage and have equal billing with two of our students,” Dr. Engel said.

While the Honors Program was present onstage, it was also at work behind the scenes. Dr. Todd Deal, a 1986 Bell Honors graduate, was instrumental in organizing TEDx at Georgia Southern and served as the event’s master of ceremonies.

“The TED theme of ‘ideas worth spreading’ is an exciting and engaging one for us,” Dr. Deal said. “As leadership educators, we realize that leadership arises from many, many places and people, and ideas are the catalyst for great leadership to emerge. By hosting TEDxGeorgiaSouthernU, we are hoping for that sort of leadership to emerge among our students and in our community.”

About the student speakers, he said, “The reason that we are hosting this TEDx event is, simply, students—their growth as leaders, their opportunity to interact with speakers, and their opportunity to speak at a TEDx event.  We actively sought out and encouraged students to apply to speak at the event, and we are thrilled that we have two undergraduates and a graduate student as speakers.”

The students were thrilled as well. Loveless said, “The speech didn’t go as planned, but I certainly am thankful for the opportunity, all the connections made along the way, and everything that I learned.”

Shaffer agreed. “I want to say thank you to those who listened, even though I spoke a million miles an hour. Really, though, I just hope these talks prompted discussions about creative connections in our world, and I hope to see the TedXGeorgiaSouthernU conference grow over the years.”

See all three talks in the videos below.