Ever since the Georgia Undergraduate Research Conference’s (GURC) conception five years ago, honors students have taken advantage of this opportunity to showcase their research locally, and this year was no exception. Eleven students in disciplines ranging from chemistry to creative writing took part in this year’s conference at Georgia College and State University’s campus in Milledgeville.

“Our panel talked about how research is actually really important to the creative writer,” Gagnon explained. “It helps the writer create an authentic world and make their fiction as close to reality as possible.” 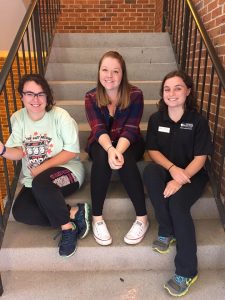 Their creative projects have been informed by intensive research, both secondary and primary. Delisle’s project, a novella about Coney Island, found her combing through archives at the Brooklyn Public Library, The Coney Island Public Library, and the New York Public Library. Gagnon spent a large portion of her summer interviewing people for her novella, tentatively titled After the War, which chronicles a wife’s struggle with her husband’s PTSD. Speaking with her cousin and his friends, who are all army rangers, helped her shape an accurate portrait of not just an army ranger’s life, but the cadence and sound of their speech, as well. She also met with a veteran suffering from 70% PTSD, helping her to better empathize with her characters. Kurtz’s poetry collection, Milestones to Maturity, deals more with her personal experiences with mental illness, but were still informed by research that included psychology textbooks and analyzing how people talk about mental illness on social media.

At a conference largely attended by STEM majors, the students were grateful to have the opportunity to present a unique perspective on research.

“We were certainly in the minority, but it was good to represent for the liberal arts,” Kurtz said. “It was definitely a fulfilling experience.” 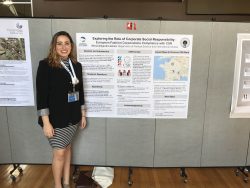 “My project bridges the gap between art and law to explore and analyze the role that the fashion industry has in the movement of accepting and implementing corporate social responsibility, particularly in European countries,” Amiel said.

O’Quinn, who presented research on energy harvesting with wind turbines, particularly enjoyed the conference: “It was an incredible experience because it provided the opportunity to meet and talk with other undergraduates who are doing research. This was beneficial because I was able to talk about future research project ideas with them.”

One of Novak’s favorite aspects of the conference was its interdisciplinary nature. She said, “Presenting at GURC gave me the opportunity to share my research with my peers in different departments. This was a great opportunity to expose my research at a convention that was not solely dedicated to chemistry; something I do not get to do often.”