A Glimpse of Graduate School

For international studies majors, travel is important, even when it is limited to the United States’ borders. While Charlotte McDonald (international studies and German ’17) has been to Germany twice, she recently found herself exploring new territory in Minneapolis, Minnesota as one of fifteen students selected for the University of Minnesota’s Graduate School Experience for Advanced Undergraduates in German Studies.

Sponsored by Deutscher Akademischer Austauschdienst (DAAD), also known as the German Academic Exchange Service, this selective program draws from applicants all across the United States and Canada. Applicants must first be nominated by a professor, and McDonald received her nomination, as well as lots of encouragement, from her German professor, Dr. Horst Kurz.

“I didn’t really get the option of whether I wanted to go or not,” McDonald joked. “He told me, you need to go.” 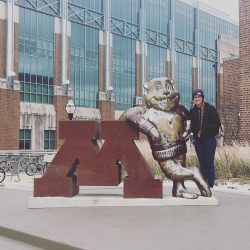 Charlotte McDonald at the University of Minnesota.

Dr. Kurz said, “Charlotte has an excellent academic record, and she has participated twice in our Study Abroad program. She has various post-graduation options, and while she may lean towards pursing a graduate program related to International Studies along with a continued study of German, it was desirable that she at least be exposed to what grad schools in the field of German as such have to offer in order to make the right decision.”

The University of Minnesota’s workshop gives talented undergraduates a glimpse of life in graduate school through two days of seminars, panels, and meetings with professors. This year’s theme was “German Studies in the 21st Century: History, Text, Image” and covered a variety of unique topics. Examples of lectures given include “Remediating German-Jewish Text and Culture” and “Portrayals of Foreignness in Recent Graphic Novels on Migration.”

For McDonald, one of the most helpful parts of the experience was discussing research interests with faculty, as well as meeting current graduate students.

“It was a lot of fun to meet current students and to see their various interests in German studies. The professors were also really informative,” McDonald said.

While she has not decided on where she wants to attend graduate school yet, the University of Minnesota is at least now a contender.

“The campus was absolutely beautiful,” McDonald said. “And it snowed, which was really cool.”