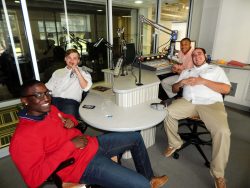 Finding informed and accurate perspective on politics has lately been difficult. From poorly-researched clickbait articles to television pundits pushing their networks’ agendas, the mass of misinformation sometimes feels nearly impossible to sort through. However, five honors students have found a way to contribute meaningfully to our country’s ongoing political conversation by creating and hosting their own radio show, Modern Political Debate (MPD), on the Georgia Southern radio station.

Taking inspiration from his Honors First-Year Experience seminar of the same name, Jarvis Steele (political science and philosophy ’19) founded the show last year when he was only a freshman.

“I got the idea from my professor, Dr. Chris Caplinger. In class, we debated modern political issues, and I thought a radio show would be an appropriate and interesting way to build on those discussions.”

Steele enlisted several other honors students to co-host, building a cast that currently includes students with ideas and outlooks that span the entire political spectrum: Bryce Colvin (political science ’19) represents the left, Dantrell Maeweather (history ’20) and Steele provide moderate perspectives, and Matthew “Big” Taylor (mechanical engineering ’19) speaks from the right. Surjania Awer (psychology & pre-med ’18), rather than lending her voice to the radio show, works as a staff writer on MPD’s website. With a cast and crew full of diverse viewpoints and academic backgrounds, MPD is able to maintain a sense of neutrality while providing perspectives that cross party lines, an aspect of the show they consider extremely important.

“Being on the show opened me up to different opinions, made me do more research, and helped me overcome my own biases,” Taylor said. “We may not always agree, but that’s what keeps it interesting.”

Colvin agreed. “Having a conversation with someone like Matthew with such radically different views than mine has helped me grow as a political analyst.”

Steele described the show as “format-less,” a guided conversation that allows for organic discussion rather than following a rigid script. Even without a script, several hours of work go into planning the show, primarily in the form of researching the issues they plan to discuss.

“If that means reading a ten page article CNN posted at 3:00 in the morning, that’s something we just have to do,” Maeweather said.

Whenever the show’s topic aligns with a GS faculty member’s area of expertise, they invite them onto the show. Past guests have included Dr. Patrick Novotny from the political science department, creative writing professor and political journalist Professor Jared Yates Sexton, and Dr. Caplinger, who expressed pride in the work of his students.

“One of the programmatic goals of FYE 1220 is to help students connect with others who share an interest,” he said. “This can lead to friendships and other connections that are lasting. Sometimes, though, students take this a step further, and institutionalize the theme of the seminar into a student group, or in this case, a radio show. Jarvis Steele and his colleagues have used the seminar as a jumping off point to add meaningfully to the Georgia Southern community. They are great examples of what we’re seeking to do in FYE.”

The show’s initial goal was to concentrate specifically on foreign affairs. Taylor explained their original vision: “We wanted to be about foreign matters, which are often ignored. Nobody cares to read, for example, about the EU breaking up. People are uninformed about what’s going on in the world, and my original intention was to combat this.”

The election, of course, caused MPD to adjust their focus, a shift that nevertheless turned out to be a good thing. One of the show’s highlights was having the rare opportunity to cover election night in conjunction with Sanford Hall Radio, an honor not given to any other show on campus.

“It was awesome to be on live during election night and watch the election unfold,” said Colvin. “It gave me an outlet for my frustrations. I also didn’t have to go through the grieving process alone because there were other people in the booth with me feeling the same emotions. Instead of sitting and moping at home, I could talk to other educated people and look at the election results from the perspective of a political analyst.”

From covering election night to expanding their show from one hours to two, MPD has been steadily gaining momentum and looking for ways to improve their outreach. They’ve recently launched an opinion column on their website, an effort spearheaded by Awer.

“I reached out to Jarvis [Steele] about joining because I was impressed with the quality of the show, and I wanted to add my voice. Jarvis said he was looking to build on his radio show, so we had a meeting, and it grew from there.”

The students at MPD have no plans to slow down. Maeweather hinted at future plans: “I see it going further than just a radio show. I could see it on TV, or as a segment on a YouTube channel. We’re going to try to get it on the internet every week, be it in the form of a video or a podcast.

“Ten years from now, if I come back to GS and walk into Sanford Hall, I want MPD to still be a show,” Colvin said. “I want that lasting legacy. I want to build something that’s going to become a part of Georgia Southern.”