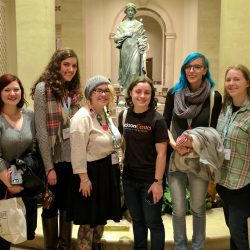 There are few places in the world where one can attend lectures by famous writers like Jonathan Franzen and Roxane Gay and then potentially run into them at yoga class or a restaurant the next day. In fact, the Associated Writers and Writing Programs (AWP) Conference might be the only place on earth where this is possible. Attracting over 12,000 writers, editors, and educators annually, this year’s AWP Conference, located in Washington, D.C., included both Georgia Southern honors students and alumni.

“The Associated Writing Programs Conference is the premier writing conference in America and provides an incredible learning opportunity for students interested in publishing, production, and simply looking for advice and support,” said Sexton. “This is the third consecutive year I’ve taken students and they seem to learn and find inspiration every time.”

Kurtz certainly did. “I loved being in a place where I felt like everyone pretty much had the same passion as me,” she said. “It was both validating and life-affirming. Getting to talk to editors of journals and magazines was really helpful and it gave me a clear idea that I definitely want to be an editor.”

In addition to helping solidify career paths, the conference also related back to some of the students’ honors thesis work.

Pride said, “Attending panels helped me with certain aspects of my thesis. I went to one that focused on writing from the perspective of the ‘outliers’ of society—murderers, kidnappers, terrorists, etc.—and because my thesis is a novel that uses psychological horror, the information they had to share was helpful.”

As the largest conference of its kind, AWP attracts several well-established writers each year, something this year’s students enjoyed. Delisle was able to attend a reading by National Book Award winner Jacqueline Woodson, a writer she had previously only encountered in class.

“One of my favorite parts of AWP was seeing Jacqueline Woodson read from her poetry. I read her memoir in my Children’s Literature class, and actually hearing her read passages from it made her work that much more meaningful to me,” said Delisle.

Rentz had a similar experience. “I got to meet Dave Eggers and tell him how much I loved reading his memoir, A Heartbreaking Work of Staggering Genius, for my creative nonfiction class. I also really enjoyed meeting some the editors who have previously published my work. It helped me really expand my professional network.”

When they weren’t busy attending panels or readings, the students had the chance to catch up with other Georgia Southern alumni. The Writing and Linguistics Department has sent several of its graduates to creative writing MFA programs, and three of them—Parrish Turner, Yavaria Ryan, and Michael Conner—all attended the conference with their respective programs. Turner came down to Washington from New York City, where he is a student in creative nonfiction at The New School, while Ryan travelled with Fairfield University. Conner, a fiction student at American University, was fortunate to have the conference take place in his own backyard. Since last fall, he has been living in Washington and enjoying both his classes and the cultural opportunities going to school in a large city affords.

“It’s no secret that Washington’s a vibrant cultural hub, but I find the most excitement in workshop,” Conner said. “Without the program, I’d never have been exposed to the writers I so desperately needed to study, nor to the writer’s lifestyle of going to readings multiple times a week, establishing consistent writing goals for my own work, and reaching out to others in the literary community for advice and support.”

When asked to recount his favorite part of the conference, he turned to his former classmates. “Seeing my old classmates was a wonderful pleasure and always leaves me yearning for a slower clock. They’re the people I write for.”