Bridging the Gap between Honors Programs 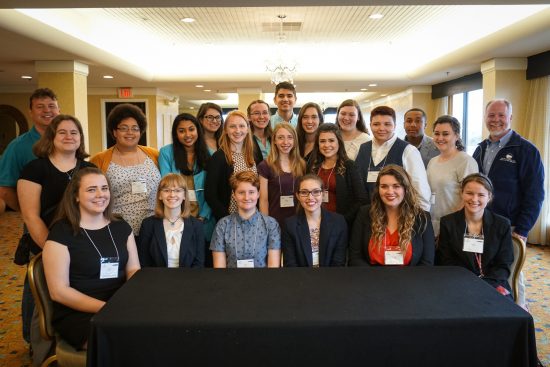 In preparation for Georgia Southern’s upcoming consolidation with Armstrong, six honors students from both schools have taken initiative in bridging the gap between the two schools’ honors programs.

At this year’s annual Southern Regional Honors Conference (SRHC) in Asheville, South Carolina, they led a panel titled “Bridging the Gap: Attempting to Foster Community Among Honors Students in a Consolidation.” Their discussion focused on methods of fostering community and building rapport between multiple campuses, something they all consider important for honors students in the upcoming years.

The students were encouraged to join forces by their respective honors program directors, Dr. Steve Engel of Georgia Southern, and Dr. Jonathan Roberts of Armstrong.

“At this stage in the process, we still do not know a great many details about how the new Georgia Southern University will be structured,” Dr. Engel said. “We know this much, however, at the end of the process, we will be one university. Consequently, Jonathan and I are both working to make sure we ensure that all of our honors students feel like they are in a shared community of scholars. There is no better way to do that then to get students together with each other and giving them the opportunity to play a part in building their new share future together.”

Dr. Roberts agreed, saying, “For the better part of the last decade Armstrong and Georgia Southern’s Honors programs have collaborated quite well with one another.  I feel strongly that the consolidation of the two institutions, done correctly, will lead to more opportunities for students on both campuses.”

These six students come from a larger group of honors students that travelled to the conference in late March; twenty-nine Georgia Southern students and eight Armstrong students had proposals accepted by SHRC, which brought in around 700 students. Their presentations included posters, papers, and thesis work from all disciplines.

Gallahue spoke about their experience: “Our goal at the conference was to begin to open doors and form the beginning bonds of friendship and community between attending Georgia Southern and Armstrong students. As we left Asheville on Saturday, it was impossible not to notice a newfound sense of unity between Armstrong and Georgia Southern students. The initial reaction to the consolidation was not enthusiastic from either campus, but when this group of students from Georgia Southern and Armstrong came together in the same room, there was nothing but warm welcome and excited anticipation of what will come as we continue merging both our academic and social programs.”