Honors in Action: Ashwood at the American Physical Society

After a year and half of research, Elizabeth Ashwood (physics ’17) presented her honors thesis at the American Physical Society (APS) March Meeting in New Orleans, Louisiana. The goal of APS is to unify the scientific community to advance people’s awareness of physics. The conference separates over 8,000 presentations into specific categories such as “biological physics and chemical physics” over the course of a week, said Ashwood. She was given the opportunity to present at the level of professionals, instead of presenting with other undergraduates. 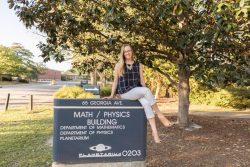 Elizabeth Ashwood outside the Math/Physics building on campus.

“My research is a development of programming tools to rapidly evaluate experimental set ups in atom interferometry,” she explained. “Atom interferometry measures the interference patterns produced by a phase difference of atomic waves.” Her goal is for her research to be used on the International Space Station (ISS) in the Cold Atom Lab, which is being sent to the International Space Station in June 2017. This amazing opportunity would move Ashwood’s thesis, “Developing Tools for a Precision Measurement of Newton’s Gravitational Constant,” from the academic setting into a professional setting.

Ashwood says her mentor, Dr. Edwards, has been an influential aspect of her research. She said, “When I first started research with Dr. Edwards, I had only basic physics 1 and 2 level knowledge, and I was just beginning to take differential equations. Dr. Edwards helped in the start by teaching me what Bose-Einstein condensates were.” Dr. Edwards aided her at the genesis of her project, explaining new, difficult concepts that would eventually become the overarching argument behind Ashwood’s thesis.

Dr. Edwards explained his experience with working with a dedicated student who genuinely loves learning: “I have enjoyed being Elizabeth Ashwood’s research mentor.  She is quick to grasp new concepts, incorporates them into her skill set, and is able to think on her own.  She is quite mature for her age and is a natural leader of other students.”

After graduation, Ashwood will enter the Peace Corps and spend two years in Swaziland.