No one has ever said “What happens in the first year stays in the first year,” and this is abundantly clear for the students who have taken Dra. Leticia McGrath’s honors section of the first-year seminar, Hispanic Culture through Film, these past few years. Not only has she stayed in contact with her former students, but she has continued to encourage them in their professional development.

Last spring, she organized several students to propose presentations at the Popular Culture Association of the South/American Culture Association of the South 2017 Conference (PCAS/ACAS), and four of her students, Caleb Beatty (electrical engineering ’20), Emily Pressler (Spanish and French ’19), Amanda Kate Wood (writing and linguistics ’20) and Maygen Martinez (human resource management ’20) participated in the conference in October. Dra. McGrath’s help throughout the entire process of applying for the conference, and creating their projects helped each student gain an invaluable experience. 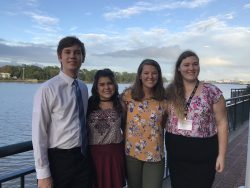 “Every year I push my students in my FYE classes to develop their research outside of the classroom, and one year I traveled with 8 students to Washington DC and Richmond, VA to present at a conference, and another year I traveled with students to Asheville, NC. I am pleased to see that there are students who embrace the added challenge of researching and presenting their findings in a public and professional manner. Given that they are doing so without any grade attached certainly shows they are taking the initiative to explore topics in a more meaningful way,” said Dra. McGrath.

The PCAS/ACAS 2017 Conference in Savanah, Georgia focused on presenting topics or events common in popular culture while molding them into academic presentations. Each student focused on an aspect of American culture under the lenses of entertainment, politics and profanity.

Martinez and Wood worked together to create a joint presentation, “Pawnee: The Greatest Community on Television.” Both of them are fans of the NBC television show, Parks and Recreation. The show focuses on the inner-workings of a community in a city government setting. The idea of blending entertainment and research intrigued them. They were able to use their favorite group of misfit characters to analyze how a community works at the fundamental level.

“A community was built amongst these characters by encouraging tolerance and establishing deep, shared emotional connections. We analyzed several aspects of the show, including: the growth of individual characters as well as of the group as a whole, the creation of shared values amongst the characters, and the examination of clear community building aspects throughout the series. Through these examinations, we can pinpoint specific ways in which the community was built amongst the citizens of Pawnee and the employees of their municipal government offices. Then we hypothesized how these methods would affect a real life town,” said Martinez.

Martinez and Wood did not implement their findings onto an official community. However, both are community leaders at Georgia Southern University. The research can help further build relationships with their residents creating a tight-knit community. Their work on campus parallels with their research for the PCAS/ACAS Conference.

Beatty’s project, “This is not a Safe Space,” focuses on the idea that safe spaces are not actually beneficial to universities and other public spaces. These designated spaces are infringing on first amendment rights, limiting creativity and prohibiting classroom discussion.

“In a time, when one in four Americans think the First Amendment is dangerous, there is merely an illusion of free thought and self-expression. Safe spaces and political correctness have grown into their hyperbolic form to the point that a person must constantly question what you say in an effort to not offend others. My presentation covered how universities and society in general have been negatively influenced by the idea of not offending,” he said.

This was Beatty’s first academic conference. There was a diverse range of presenters and attendees at the PCAS/ACAS conference from students to professionals with published research. This conference also allowed Beatty to study something outside his field of study. He said, “I was able to research an interesting subject that has nothing to do with my major. I personally like being a well-rounded person. After doing math and science all day for my electrical engineering degree, it was very beneficial to be able to break away from that and present on something that is important to me.”

Pressler researched the difference in the use of offensive language in Spanish and English, in her project: “WTF?!: Cursing trends in Spain and the United States through film.” She analyzed two films released in the same year, with similar stories, reviews, and popularity. She found that Spain’s use of profanity is more accepted and wide-spread, rather than America.

“I analyzed the frequency of words/phrases, content, context, etc. to compare overall use in both cultures through film. I selected Ocho Apellidos Vascos (2014) (“Spanish Affair” in English) from Spain and Two Night Stand (2014) from the United States, which are comparable in release date, rating, length, content and theme,” Pressler said. “What I found is that Spaniards curse with more frequency, have more varied vocabulary and arguably use words/phrases with greater significance than their United States counterparts.”

Pressler specifically created this project for the PCAS/ACAS 2017 Conference. However, this presentation has inspired her to continue researching this topic for her Honors Thesis. “I want to keep analyzing other linguistic characteristics of Spanish through further films and literature,” she said.

The Honors Program at Georgia Southern University encourages students to fully take advantage of every academic opportunity while attending college. These four student pushed themselves to make independent projects outside of class assignments. “Being a part of this prestigious program has challenged me to approach subjects to which I was once unknowledgeable. It has also lead me to exert myself more in my academics, such as presenting at this conference,” Wood said.