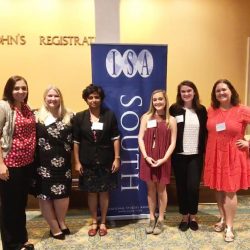 Archer’s thesis, “Does Difference Make a Difference? Exploring the Relationship Between Gender, Political Ideology, and Human Rights,” examines the correlation between political identity of female executives and their work for better human rights. Archer discovered that women that identified with far left politics were more likely to support projects and laws for increasing human rights.

“My thesis looks at female chief executives and their human rights practices domestically. My research is different from existing literature, however, because I study these female leaders in conjunction with their political ideologies. I seek to understand if female chief executives navigate the political double bind that they face differently depending on their ideology. Furthermore, I want to know how this navigation affects their domestic human rights practices,” she said.

Archer addressed the importance of her mentor, Dr. Courtney Burns, in the early stages of development, during the editing process and throughout instilling confidence in her research. “Dr. Burns has been such a great resource to have on my team in this entire process. Since I began my work on my thesis, she has helped me develop my ideas, interests and passions into a project that I am proud to work on. At the conference, she never stopped providing me encouragement, until the moments before my presentation. I look up to her more than she will ever know,” Archer said.

O’Donnel’s research titled “Indigenous Tribes in the Brazilian Amazon: Finding a Balance between Sustainability and Economic Development” focuses the dwindling number of indigenous tribes while trying to find a solution for both indigenous peoples and the encroaching modern world to coexist.

During the writing and editing process, O’Donnel’s Thesis developed with excellent direction and mentorship from Dr. Mathew Flynn. “Dr. Flynn helped me sharpen my research topic and finalize my research design. He provided me with sources, such as books and journals, to use in my literature review,” she said.

At the conference, O’Donnel presented with a panel of doctoral students who also study indigenous sustainability. She was the only undergraduate student presenting research in this field. “The ability to have feedback from professors who specialize in this subject and to converse and compare doctoral dissertations was invaluable. I will definitely improve the content of my thesis,” she said.

Stovall’s research “Recruitment of American Citizens to International Extremist Religious Groups Via Social Media” analyzes the evolution of terrorism because of advancements in technology, specifically the rise of social media. Platforms such as Facebook, Twitter and Instagram are creating an online environment with susceptible members being influenced by endless amounts of information.

“The study of terrorism has rapidly changed over the past ten to fifteen years. Technological advances and a change in the objectives of extremist terrorist groups have made this field more difficult to study. This research focuses on how technological advances, particularly social media, such as Facebook and Twitter, have made a direct impact on the recruitment processes of extremist terrorist groups such as ISIS on western audiences, particularly on American citizens,” she said.  “This research shows the impact of social media on recruitment done by extremist groups. It shifts the narrative of the recruitment of Middle Eastern citizens to the less accepted idea of ‘home-grown’ terrorism and recruitment of American citizens within their own homes.”

After three semesters of constant work and dedication, this conference allowed Stovall to gain feedback from fellow scholars in the field of terrorism. “I had a lot of people come up to me and tell me how interested they were in my research. People gave me their business cards, and told me to email them if I ever needed any help. It really made me feel good that people were so interested in what I was doing and were recognizing all of the hard work that I have done over the past year,” she said.

Her experience of completing the Honors Thesis has provided her with skills that she can use in later endeavors. “Writing my Honors Thesis is a very long process that requires a lot of time, patience, and editing. I think that having to go through this process really prepared me for my future in law school,” Stovall said.

Her experience of completing the Honors Thesis has provided her with skills that she can use in later endeavors. “Writing my Honors Thesis is a very long process that requires a lot of time, patience and editing. Dr. Srobana Bhattacharya played a huge role in my entire thesis process. I would not have known where to begin without her. Overall, I think that having to go through this process really prepared me for my future in law school,” Stovall said.

Shannon’s thesis, “How Does Student Participation Create Change in University Towns” analyzes the effects of student involvement in a growing community. She specifically examines students’ political and economic values. 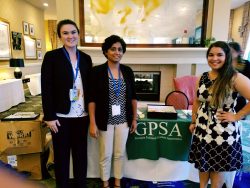 “Being an active political citizen not only impacts these individuals’ personalities or marketability for plans after their undergraduate degrees, but it also has an effect on the groups and communities that the students get involved in. It is clear to see that cities and towns are influenced and changed by the presence of universities and university students. The important question is how student political and economic involvement affect local communities and government decisions in university towns? If we can figure out how active citizenship and student involvement affects local communities and what types of involvement help to create change, then we can figure out how to change our communities and eventually the world,” she said.

The Honors Thesis provides freedom for students to research topics outside the classroom. Shannon used this opportunity to research a subject that she finds interesting, because she is extremely involved with the Statesboro community.

Her research mentor, Dr. Robert Pirro, helped Shannon focus her argument, gain resources and improve her writing. “Without Dr. Pirro’s guidance, I would have been lost on how to conduct my research and with putting myplans into writing. He gave me ideas, feedback and advice on my thesis,” she said.

The International Studies Association South Region conference and the Georgia Political Science Association conference provided these students with the chance to present their research as well as meet and talk to professionals in their specific fields. “The aspect about the conferences that I enjoyed the most was conversing with other scholars in my field and with the people whose works I have read and studied in my classes here at Georgia Southern University,” Archer said.