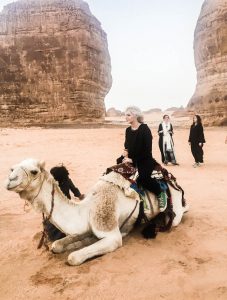 Saudi Arabia is a country filled with expansive, bone-dry deserts, broken-up by sprawling cities. The country exists in a section of the world that appears to U.S. news audiences to be in constant unrest and turmoil. However, Emily Krout (political science and Arabic ‘19) sees Saudi Arabia as a land of opportunity.  Krout envisions a country ripe with diplomatic exploration. She wishes to travel and to give back to the country through professional service at the national embassies.  Krout’s dream became a reality this semester when Emily Bless, Secretary for the National Council on US-Arab Relations, offered to support Krout on an academic and cultural trip to Saudi Arabia.

“I was applying for a scholarship to study in Oman this summer for an intensive Arabic learning program, and asked Emily Bless personally for a letter of recommendation. She was happy to write the recommendation, and then offered to sponsor me on a study visit to experience Saudi Arabia,” she said.

In February, Krout spent two weeks in Saudi Arabia traveling in the country, exploring Damman, Riyadh, AI-‘UIa and Jeddah. Each city focused on different aspects of economics, such as oil and tourism. The purpose of this trip was to improve American students’ understanding of Saudi Arabia through authentic experiences of the country’s rich culture.

“While in Saudi Arabia, we were expected to be open-minded about the experience and behave in a professional and diplomatic manner. The goal of the program was to experience the ‘real’ Saudi Arabia, and to dispel the ideas that we saw in the media during the trip. We were being filmed as representatives of the National Council on US-Arab Relations representatives for a one-hour documentary run by the Saudi news channel, Rotana. We were encouraged to reflect upon our ideas during the trip and were interviewed during the two weeks for the film about our academic thoughts and personal experiences during the trip,” she said.

Being a part of the Saudi Arabian documentary provided Krout with the opportunity to meet influential people in the country. Krout met and conversed with Prince Turki Bin Faisal, the former Saudi Diplomat to the US and the UK and Prince Saud Bin Nayef, the Governor of eastern Saudi Arabia. Krout and the other participants were pushed to ask the princes difficult questions about their roles in Saudi Arabia.

Krout said, “I was privileged to spend personal time with Prince Turki Bin Faisal, as he invited us to dinner at his home and sat and talked with me about his diplomatic abilities, his relationship with former presidents, and the Camel Beauty contests that were recently held in Saudi Arabia. He had very many positive things to say about the relationship between Saudi Arabia and the United States and handled questions about Iran and Turkey charismatically. This was a special moment for me, because I was able to speak one on one with someone who had lived their life as a diplomat, and has created an unforgettable legacy for himself, for Saudi-US relations, and for the Saudi people.”

Krout is currently working on her proposal for her Honors Thesis as well as presenting a poster at the Middle Eastern Symposium in Augusta, Georgia. Her research focuses on the possibility that economic diversity in economies driven by oil can affect strict religious and conservative societies. Krout wishes to continue this research in graduate school continuing her focus on Middle Eastern culture.

“I plan to obtain my Ph.D. in International Studies with a focus on the Arab region and economics. I am hoping to attend graduate school in Lebanon, Jordan, or Qatar, as this will provide an opportunity to learn Arabic and obtain a degree from an American accredited university. I hope to find a researcher at a university that resonates with my studies and go from there,’ Krout said.

Krout’s plans for her future began with her involvement the moment she stepped on campus at Georgia Southern. Her participation in Model United Nations (UN) and Model Arab League helped grow her passion for Arabic as well as her interest in diplomatic policies in the Middle East. Her time as a student in her first-year Global Citizens course allowed her to see beyond Statesboro and instead at a global scale. Krout’s travels to the Middle East, while a student, provided her with experiences of a new culture and language.

“There is so much to experience by studying abroad that cannot be learned otherwise, and that can help a student to further solidify career goals. Not only will it make any application stronger, but it will also encourage you to work harder to achieve your career goals, as it makes them more attainable. Traveling abroad is about the experience, and it is an opportunity to provide yourself with the needed skill sets for life after college,” Krout said.