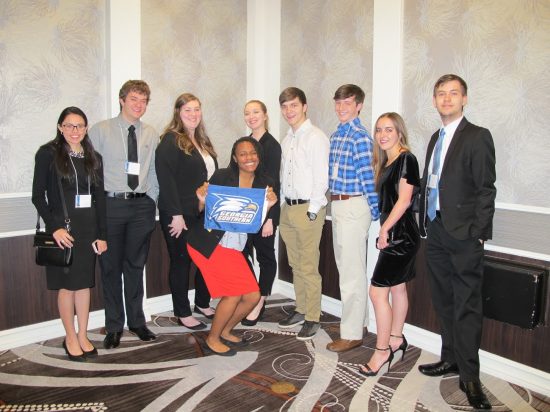 Several Honors Program students traveled to Las Vegas for the Far West Popular Culture Association conference, and what happened in Vegas is something that will not stay in Vegas. They got experience presenting research and they met fellow students and faculty from colleges across the country. Dra. Leticia McGrath, a professor of Spanish who also teaches the Honors first-year seminar, Hispanic Culture through Film, took nine students to the interdisciplinary conference.

Two of the students had presented at conferences with Dra. McGrath before. Emily Pressler (Spanish and French ‘19) and Caleb Beatty (electrical engineering ‘20) had both attended the Popular Culture Association of the South/American Culture Association of the South Conference (PCAS/ACAS) in Savannah with Dra. McGrath in October of 2017, and they were excited to attend the conference in Las Vegas.

“I analyzed the frequency of words/phrases, content, context, etc. to compare overall use in both cultures throughout the Spanish film Ocho Apellidos Vascos and the American film Two Night Stand, which have a similar release date, rating, plot and length. My research suggested that Spaniards curse with more frequency, have more varied vocabulary and arguably use words/phrases with greater significance than their United States counterparts,” she said. This project coincides with similar research that Pressler is doing for her Honors Thesis.

Beatty’s presentation was on a much different topic. His presentation, titled “Ride of the Machines,” discussed the increased and growing use of the neural network known as OpenAI in all forms of technology. In 2017, the technology was used in a gaming competition and successfully beat a human in the PC game Dota 2. “The game requires many human traits such as an intense amount of reflexes, strategy, and foresight,” he said.

Beatty’s presentation highlighted the significance that this technology has on industry, especially industries that we interact with daily, and discussed how these advances in Artificial Intelligence stand to drastically alter our society. “In my presentation, I talked about the ethical and societal impacts that this inevitable advancement could cause.”

Both students agree that presenting at a conference may seem daunting, but they emphasize that presenting research in these public forums is a great way to build public speaking skills, research skills and overall confidence in academic abilities.

“Conferences are a great way to network with other conference attendees and learn new things! I have had nothing but great experiences at the conferences that I have attended. I have been able to get feedback on my research and meet people in my field working on similar research. It also serves as a good ‘test run’ before having to present your thesis project,” Pressler said.