Lifting the Heavy Weight in the Classroom and in the Gym

Finding rigor not just in the classroom but also in the gym, Michael Cohen (health science ’20) placed seventh overall in the world at the 20 & Under World Championships for weightlifting in Tashkent, Uzbekistan. This Olympic style event included both the snatch and the clean and jerk.

Competing in weightlifting since he was four years old, Cohen has traveled all over the world for competitions, including Japan, Peru, Mexico, Poland, and Russia. His favorite perks from all of this international travel are being able to explore different countries, try food from other cultures, and learn phrases from the languages spoken in each new country. He also enjoys swapping USA team gear for other nations’ team gear as souvenirs. 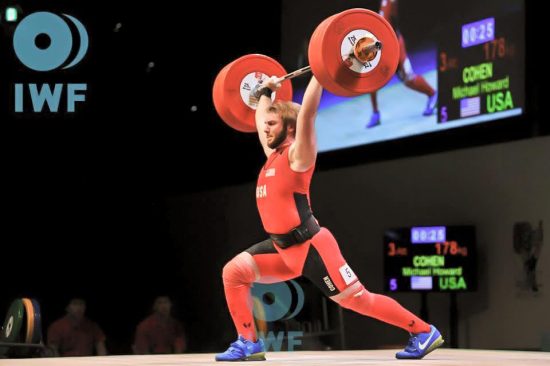 Cohen at the 20 & Under World Championships (photo: IWF)

Cohen is coached by his father and grandfather. In fact, weightlifting runs in the Cohen family. Cohen’s grandfather made the U.S. Olympic Team in 1956; unfortunately, he broke his neck and was not able to compete. His father, Michael, Sr., made the Olympic Team in 1980 but could not compete because the team boycotted the Olympics that year. After that, Michael, Sr., turned to coaching. He is a two-time head coach for the U.S. Olympic women’s weightlifting team (2000 and 2004) and has personally coached several Olympians. Cohen’s younger brother, William (psychology ‘22), also competes internationally.

He hopes to be the first in his family to represent the U.S. in the Olympics. “Being able to go to the Olympics would be the pinnacle of what I could achieve in the sport.” He jokes that if he does not make it, he is not allowing his kids to follow the family path, as the family may be cursed.

He has had his own share of obstacles to training and competing as well. During his senior year of high school, he had to undergo back surgery to correct a herniated disc. The herniation was caused by a birth defect in his back that was further damaged during a missed lift. Specifically, the surgery was a micro discectomy, meaning part of the disc was removed.

Cohen said, “It was the toughest mental challenge I’ve had to face. You have to convince yourself that you’re not weak and you will get stronger. I used to tell myself, ‘I’ve done it before; I can do it again.’” With this mentality, Cohen was able to make an impressive comeback and win the 20 & Under Nationals in 2017, five months after the surgery.

As a junior on the Armstrong campus working towards a health science degree, with a focus in human performance and fitness management, Cohen has consistently earned a 4.00 GPA while maintaining his rigorous weightlifting training schedule and being an employee at his gym.

When asked about how he has been able to balance all of his activities, Cohen said, “There’s a lot of planning and organization that goes into succeeding both in school and in weightlifting. Many times, I’m studying on the plane and planning out my work, up to four weeks in advance.”

Cohen also has another time management strategy that involves being focused. “You also have to have a set time that you’re going to lift, and while you’re lifting, you can’t be worrying about anything else. The same goes for school.” Cohen’s experiences in weightlifting and in academics have led him to pursuing a master’s degree in public health, and he ultimately hopes to teach, consult, or open his own gym.

Cohen says he loves weightlifting because of its focus on self-expression and personal growth. “The sport is individual: your success or failures depend solely on your performance,” he said.

When asked what motivates him, Cohen said, “There’s always someone that’s lifting more, and the only way to get to that point is to keep training.” That same motivation and persistence are what helped push Cohen to succeed academically.

For now, his focus is on his next competition – The American Open series 3 held in Las Vegas this September. The Georgia Southern Honors Program wishes Cohen the best of luck!