Where in the World is Sophia Fleri?

Study abroad advocates claim that taking one trip will only convince students that they need to go on another.  Sophia Fleri (mechanical engineering ’20) needed no such convincing as she spent this past summer going on her third and fourth study abroad experiences.  After her freshman year, she travelled to Argentina.  Then it was off to Romania after her sophomore year. And this year she participated on the trip to Shenzhen, China and Munich, Germany, spending a total of nine weeks outside of the country.

Fleri’s courses in China were her first history classes not focused on American or European history. “I took a history course that was not taught from a Eurocentric standpoint. The course had an appreciation for the worldview, and I was able to learn more about the culture I was visiting while living there,” Fleri said.

Spending four weeks in Asia for the first time had its challenges. Fleri had to adapt to a culture with more differences than similarities to her own. “The language was extremely difficult to grasp, let alone read. Typically, the countries that I have visited have spoken a Romance language. I have studied both Spanish and French in elementary and high school, so picking up these languages was not difficult,” Fleri said. “Chinese’s use of characters rather than an alphabet made it difficult to understand. I had to rely on gestures, facial expression, and body language to get by. Despite our lack of knowledge of the language, everyone was very kind when communicating and curious about us.”

Finding their way in unfamiliar surroundings, Fleri and her peers slowly became accustomed to the unique and special qualities of Chinese culture. “Navigating and understanding signs became easier. Cultural norms became more apparent to us. We learned to order enough food to share between ourselves rather than individual meals. These are all attributes of a culture that you absorb through experience,” she said.

The trip also included seeing many historical sites in China, and Fleri went to several landmarks such as the Buddhist Feilai temple, the Xi’an City Wall, the Love Tree in the Emperor’s Hot Springs Garden, the ruins of the Terracotta Warriors, and the Lotus Mountain Park.

After wrapping up her first summer term in China, she moved on to Munich, Germany where her courses focused on environmental studies, specifically Germany’s efforts to promote and to use renewable energy.

“Going on this trip was an experience of a lifetime. I not only experienced a new culture and a new language, but I found an environment that I had been searching for. Everything was centered on the environment with parks in every big city, populated with people relaxing, exercising, or working. People were active, either biking to work or to the store; there were recycling bins in front of every house,” she said. 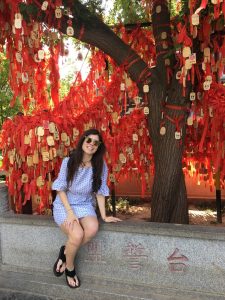 Fleri found the city to be at the scale of the individual and walkable. “We walked anywhere and everywhere, to go to the grocery store, to a nice restaurant, to parks, to museums, to festivals, to historical landmarks, and to churches,” she said. Given the city’s extensive public transit, Fleri and her peers were not limited to one area and took the opportunity to explore every aspect of the city.

While living in Germany, she felt closely connected with the country. She adapted quickly to the language which eased navigation and communication. The city itself was different for Fleri because of the mélange of historical styles in the architecture.

“The buildings were centuries old with their original facades. It was a society rich in history and progress. I wanted to speak the language and know their trends and culture so much more deeply. I hope to live there one day and work in a place that values environmental sustainability as much as I do,” Fleri said.

Studying Abroad has become an important aspect of Fleri’s education, helping her gain cultural awareness, flexibility, and cross-cultural communication. And she knows these skills will be useful beyond graduation once she’s in her career.

Fleri hopes students will take advantage of the opportunities abroad. “Go. Go now. Go unquestioningly and quickly. There is so much more to learn about the world that you never knew existed. It helps you learn first-hand about things you would study in the classroom. It is never too late to go,” Fleri said.