Treasure Savannah has been a hallmark opportunity for Armstrong students to give back to their community for over a decade. This fall’s edition of Treasure Savannah was no different—except it was the first one for the newly consolidated Georgia Southern University. In line with the value of Civic Responsibility, one of the four foundations of the Honors Program, Honors students at the Armstrong campus continued to maintain their record of highest voluntary participation for a campus organization.

Treasure Savannah is affiliated with several corporations, providing students with several options. This year, the activities focused on aiding the homeless, cleaning the campus and local community, and volunteering at an animal assisted therapy organization. Some Honors students served as site leaders, managing and allocating work to their group of students.

This event gives all students the opportunity to volunteer and engage with their peers in a new environment, which sets it apart from the typical, individualized approach to volunteering that many students take.

“It was better to go with a group of people. It felt like we were more motivated to get involved when we had each other around,” Jacquelyn Zipperer (physics ‘22) said. “It felt that there was a sense of solidarity, as you were not under someone, but working together.” In fact, Zipperer even made a new “volunteering buddy” who she plans on volunteering with in the future.

Another advantage for students provided by Treasure Savannah is the ease with which students can volunteer. Senior Carly Mathis (communication sciences and disorders ‘18) explained, “My other volunteer services I had to go find, while Treasure Savannah was brought to me.”

Fellow CSDS major Sara Dietrich (communication sciences and disorders ‘20) agreed. “There are a lot of people who participate in Treasure Savannah who don’t normally volunteer,” she said

For most students, the most valuable part of the experience is not that they receive hours of community service, but that they get to engage in aspects of their community in which they would not normally. This semester, the Honors Program attendees were able to visit Hoofs 4 Healing, a local equestrian therapeutic riding center for children with disabilities. While donating their time, students learned about the programs offered at Hoofs 4 Healing, such as therapeutic riding. A regular volunteer, who was participating during this event shared her personal experiences with therapeutic riding. Mathis enjoyed hearing the stories of others. “Her story helped us see the impact of service that the organization was providing first-hand,” she said. 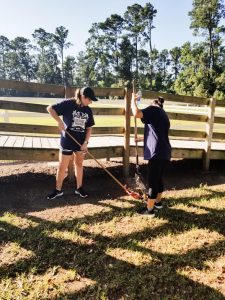 In addition to the hours and the engagement, some students gained leadership experience, like Jacquelyn Zipperer, who is in the Nick Mamalakis Emerging Leaders Program and was one of the site leaders for Treasure Savannah. Although this experience put her in a position of leadership, Zipperer insists that “it was not about being a leader, but rather being available to people when they needed me.” Site leaders are responsible for answering questions and making sure students get where they need to be and do what they need to do. In many ways, site leaders are providing their own form of service to the volunteers in addition to the locations at which they served.

Out of all the students asked, all reported that they were looking forward to participating in this event again next semester. Some students suggested more locations so as to avoid over-populating some service sites, but the future for Treasure Savannah looks bright on the Armstrong Campus, and the Honors Program looks forward to continuing its strong show of support for community service.