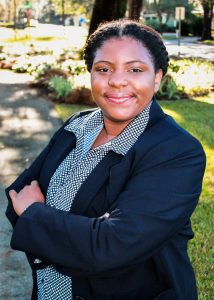 Carolynn Nixon (political science) graduated from Georgia Southern University in 2017, but she still keeps in contact with her peers and mentors. This fall, those networks helped in her successful pursuit of a Charles B. Rangel Fellowship, which will provide funding for a master’s degree program in international affairs and placement in internships with the United States Department of State. Upon completion of the two-year degree, Rangel Fellows work for the government for five years.

Honors Program alumnus Tony Hudson (international studies, ’17), one of Nixon’s peers, received this award in 2017. Hudson inspired Nixon to look into the program and eventually apply. Nixon’s support from her peers as well as her professors gave her the push she needed to pursue this opportunity.

Dr. Jamie Scalera, a professor with the Department of Political Science and International Studies, was an important figure for Nixon during the application process. “She notified me when the application was open, read drafts of my purpose statement, wrote me a letter of recommendation, and made sure I was in contact with other students who had applied. All of my professors in the department have always been supportive and encouraging. They continued to look out for my best interests even after I graduated,” she said.

Nixon was chosen as one of 60 finalists from a pool of over 800 applicants. Many of the 60 finalists, including Nixon, were flown to Washington D.C. for an in-person interview. Finally, in early November, Nixon was notified of her achievement.

She will hold the title of a Rangel Fellow for seven years. Her fellowship provides her with financial support to attend graduate school. After earning her degree, she will serve as a Foreign Service Officer for five years. “After my time with Foreign Services, I hope to continue my post at the United States Department of State,” Nixon said.

Patricia Scroggs, Director of Diplomatic Fellowships, worked directly with Nixon during the application process and will continue to work with her during her fellowship. “We are thrilled that Carolynn will join us as a 2019 Rangel Fellow. The selection panel was impressed by her intelligence, professionalism, and commitment to promoting positive change in the world,” she said. “I am confident that her experience at Georgia Southern University helped prepare her to succeed. I am looking forward to working with her and to seeing all that she will accomplish as a U.S. diplomat.”

While a student at Georgia Southern University, Nixon was an active member of the Honors Program. Her relationships with her fellow students allowed her to thrive in this academic environment. She pushed herself both socially and academically.

“I love the people I met at Georgia Southern. I created a community of support, empowerment, and family at Georgia Southern University, and I really miss that closeness. My professors, coworkers, and fellow students really provided an amazing experience for me over those four years,” Nixon said. “Presenting my research at the Annual International Studies Association Conference in Baltimore and the GPSA Conference in Savannah was also really exciting and rewarding.”

The University Honors Program promotes a critical sense of inquiry, a spirit of creativity, civic responsibility, and a global perspective. Nixon excelled in each category, determined to take advantage of the opportunities presented to her.

“From the time I first arrived on campus for orientation and in my first semester, it was always about taking advantage of opportunities. The flexible course requirements gave me a lot of freedom to choose the classes I wanted to take and that made my education more enriching because it was my choice,” she said. “My degree was in political science, but I took courses in international studies, human rights, and the global south. Studying abroad through Georgia Southern University was my first international experience and really excited me about being a part of the world beyond our borders. My education at this university is what I learned in the classroom as well as through life experiences.”